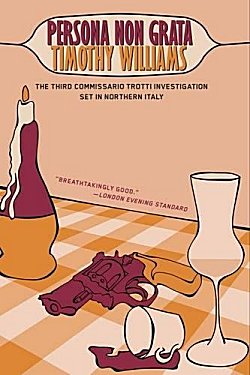 First Line: There was the smell of coffee on his breath and, as he spoke, small clouds of moisture escaped from his mouth into the chill air.

Northern Italy, 1985. Commissario Piero Trotti is on the verge of retirement. Although he's widely respected for his integrity and work ethic, almost no one on the police force likes him. Even his family has walked out of his life. Everything is telling Trotti that he needs to make a change, but instead he sticks to the only thing he knows: his work. The entire city is enraged when a young girl is attacked in her bed by an intruder. With the help of Ciuffi, a female brigadier who still listens to him, Trotti sets out to find the truth.

Sometimes it's just not meant to be. Have you ever tried multiple books written by the same author and had none of them "grab" you? That's what's happened to me with Timothy Williams. This is the second book he's written that I've read (from two different series), and both just fell flat.

In Persona Non Grata, the reason for my disinterest lies almost entirely in the lap of Commissario Piero Trotti. He is a thoroughly unlikable person. The only character that I did like was Ciuffi. She's good at her job, she works hard, and she's sick and tired of being treated like a fourth-class citizen by the men in her department. She has some very valid complaints which she brings to Trotti's attention from time to time. She admires and respects him for the quality of his work and would love to have him as her mentor, but Trotti very plainly has no intention of listening to anything she has to say unless it directly relates to the case they're investigating-- and sometimes not even then.

As always, your mileage may certainly vary-- and I hope it does-- but for me, I think I've learned my lesson. I'll refrain from reading any more of this author's books. He undoubtedly enjoys so-so reviews just as much as I (don't) enjoy writing them.