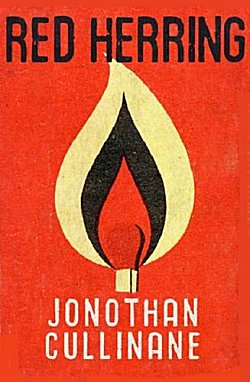 First Line: Johnny Molloy stood in the shade of a verandah at the bottom of Vulcan Lane and watched the wharfies marching up Queen Street.

The frontline of the looming confrontation between workers and government is the waterfront in 1951's Auckland, New Zealand. Private investigator Johnny Molloy is looking into a murder and finds himself up to his eyebrows in union politics, political maneuvering, and anti-communist hysteria. He also runs into Caitlin O'Carolan, a reporter following her own leads. When they start working together, they uncover a conspiracy which will ultimately endanger their lives.

Red Herring harkens back to the golden days of hardboiled private investigators, with its clipped prose, gangsters, Communists, and fisticuffs. It is a genre that I've never cared much for, but Cullinane brings the time period and setting to life. For me, this was the best part of the book because none of the characters lit a spark in me. However, if you like handsome, laconic P.I.s and beautiful, feisty reporters in a pitch perfect setting, give this a try. I bet you'll enjoy it!