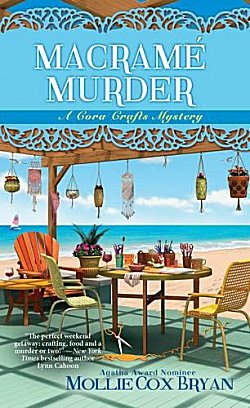 First Line: The bride resembled a mermaid princess in her sparkling white-blue outfit.

Cora Chevalier and her cohorts have taken a break from their own crafting business to teach classes at the Sea Glass Island Craft Retreat in South Carolina. Cora's boyfriend Adrian has also come along, and when she isn't teaching or participating in other crafting classes, she's hoping this time with Adrian will help strengthen their relationship.

When they arrive, Cora and Adrian encounter a stunning beach wedding and blissful newlyweds, but the next day the bride is found dead, and Cora is in shock-- even more so when Adrian is a suspect in the woman's murder. With locals believing Adrian is the killer, there's only one thing Cora can do-- find the real murderer herself.

I continue to enjoy this mystery series with its emphasis on crafts and murder. Cora is the type of character I really like (even though she suffered from a few too many panic attacks in this book)-- she's smart and compassionate, and the years she spent being in charge of a shelter for abused women gives her a different perspective on the human race. Her former career also taught her not to behave as though she's a trained police officer. Cora is primarily a businesswoman who hires teachers for her craft retreats; she isn't the Martha Stewart type who can run any sort of class she puts her mind to, so I was puzzled when I learned that she was teaching at this South Carolina retreat. When I found out what her class was all about, it made perfect sense-- and I'll let you find out what it was for yourself.

I was happy to see that Cora and her friends were in South Carolina. This avoids the old Cabot Cove Syndrome nicely, and-- let's face it-- if you found out people kept getting bumped off at a craft retreat you were thinking of going to... would you go? Probably not, unless you believe yourself to be Miss Marple reincarnated.

I enjoy the craft retreat setting and the characters, and I also enjoy trying to solve the mysteries. The mystery in Macramé Murder is complex, and I didn't have it all figured out before the reveal, which is always a good thing. Speaking of "good things" (didn't Martha Stewart used to do that?), that sums up Mollie Cox Bryan's cozy series perfectly, and I hope you give it a try.