Death by His Grace by Kwei Quartey 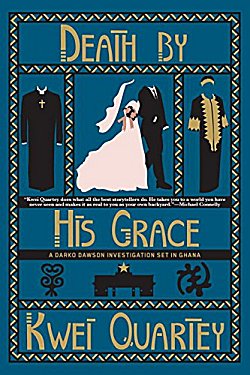 The marriage of Katherine Yeboah to wealthy Solomon Vanderpuye is the talk of Accra society. Unfortunately, the couple's happiness evaporates when it becomes apparent that Katherine cannot have children. Solomon's family accuses Katherine of being a witch, and they're so cruel that they actually persuade Solomon to force Katherine out of their home. Alone on her last night in the house, Katherine is brutally murdered.

Chief Inspector Darko Dawson of the Ghanian federal police has more than professional reasons to find Katherine's killer: Katherine is his wife's first cousin. While his wife grieves, Dawson begins to investigate-- and he learns that several people close to Katherine had powerful motives to kill her, among them her husband, her lawyer, and her pastor. In order to unmask Katherine's killer, Dawson is going to have to confront the pivotal role religion plays in Ghana.

If you are an armchair traveling sleuth who loves to solve mysteries set in other countries, I recommend Kwei Quartey's Darko Dawson series. Quartey sets you down firmly on Ghanian soil and lets you immerse yourself in the land, the culture, and the food of this amazing country. The author also gives you characters with very real lives. Dawson's father has Alzheimer's and must be cared for. Dawson and his wife Christine are also dealing with a son who likes to hang out with gang members. Add a wheelchair-bound brother, a busybody mother-in-law, and the fact that Christine is a woman who speaks her mind, and it's easy to see that family life can be a bit challenging for a man who throws himself into each of his investigations.

Quartey has created a strong mystery with excellent misdirection, but he does leave some loose ends, like Dawson's new (female) partner whom I'd certainly love to know more about or the things his father began to tell him about his mother which Darko had never heard before. Is the author planting seeds for his next book? I hope so-- especially because Death by His Grace has an abrupt jaw-dropper of a cliffhanger that many readers probably aren't going to like. What did I think? I was shocked but liked the author's bravery in doing what he did. After all, this is a police procedural, not a cozy mystery. Readers should expect to be rattled from time to time. Now that I have been well and truly rattled, I can't wait to get my hands on the next Darko Dawson mystery!