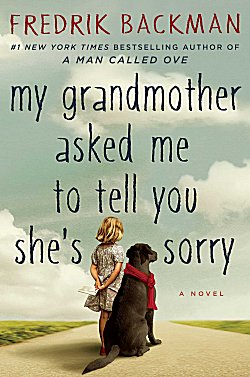 Seven-year-old Elsa's seventy-seven-year-old grandmother is her best and only friend. At night, the little girl takes refuge in her grandmother's stories because in the Land-of-Almost-Awake and the Kingdom of Miamas, everyone is different and no one needs to be normal.

When Elsa's grandmother dies, she leaves behind a series of letters apologizing to people she has wronged, and when Elsa begins to deliver them, her adventure begins.

Now that some time has elapsed since I read this book, I'm able to look upon it more charitably. I loved A Man Called Ove, and I think that made my expectations of this book much too high.

The two main characters-- Elsa and her grandmother-- are characters who can tug at your heartstrings. Elsa is scary smart for a seven-year-old, and at times she's very funny. Her grandmother is known for speaking her mind and doing crazy things like standing on the balcony and shooting paintball guns at passing strangers. Even though she could be very funny, I never lost sight of the fact that the old lady would be a real pain in the neck to deal with. If I represented the middle generation between these two, I'd probably be escorted briskly (and gently) to the nearest rest home. Do not pass go. Do not collect $200.

What I never expected was the fact that this book very quickly became a chore to read. It needed editing and tightening (beginning with the unwieldy title) because the gradual unfolding of key elements of the plot was much, much too gradual. I almost abandoned the book several times, but I just couldn't. I had to know if life was going to be happier for Elsa. So... I found Backman's book to have a great idea that was poorly executed-- and this has made me leery of reading his next book.