The Decorator Who Knew Too Much by Diane Vallere 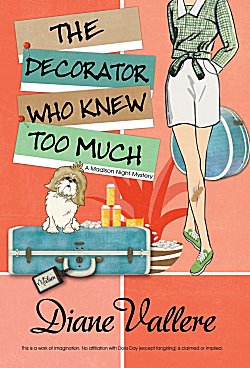 Expecting designing days and romantic nights when she and main squeeze Hudson James accept an assignment in Palm Springs, interior decorator Madison Night has to adapt to reality very quickly.

Madison causes a rift in the team when she spots a body in the river near the job site. She's also having recurring nightmares and fighting what could be a developing dependency on sleeping pills. She's finally convinced that she needs to seek professional help.

Before her first appointment, Madison learns more about the crime than she'd like. Even dressed in her vintage 1960s clothing, she looks like just the sort of person anyone could confide in. But when Madison finds out that the dead body belongs to the doctor she's made an appointment with, she wonders if her knowledge can help catch a killer.

I'd seen earlier books in this series-- which is also called Mad for Mod-- and thought they might be too cute for my taste. After reading Vallere's Material Witness series, I decided that I'd give The Decorator Who Knew Too Much a try. I'm certainly glad I did. Madison Night might dress in 1960s clothing and be wild about the interior design of that era. Doris Day may even be her role model and hero. But there's a surprising depth to this seemingly superficial cuteness that soon made me a believer.

I'm of an age where, as a child, I remember watching Doris Day movies when she was starring in films like Pillow Talk and Move Over, Darling. When I grew older and started watching the Late, Late Show on television, I learned that Doris Day had a varied and prolific career, and as the character of Madison Night would occasionally give her reasons for making Day her role model, it made perfect sense.

Madison quickly became a fascinating character that I could like and admire. With her Shih Tzu named Rocky, her love interest named Hudson James (Rock Hudson? James Garner?), and a vintage wardrobe complete with the pattern numbers for each ensemble, I had a big smile on my face as I read the book. Could be all those Doris Day movies I've seen, or the fact that I had a grandmother who made most of my clothes back then using patterns like the ones Madison mentioned. Who knows?

Palm Springs is probably the world capital of mid-century modern architecture, and readers do get to visit an example while Madison is trying to solve the murder. Vallere not only provides excellent backstory for her characters, she's created a fast-paced, addictive mystery with multiple suspects and plenty of different motives.

I loved The Decorator Who Knew Too Much, and I've already purchased the earlier books in the series. I found this book to be an absolute delight!