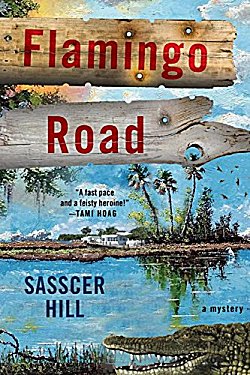 First Line: My name is Fia McKee, and I was a Baltimore City cop until that November night when I drove through West Baltimore alone.

Put on leave from the Baltimore Police Department, Fia McKee is given a second chance and grabs at the opportunity to work undercover for the Thoroughbred Racing Protective Bureau (TRPB) at Gulfstream Park in Florida. Working as an exercise rider and keeping an eye on two racetrack workers whose horses consistently outperform all expectations, she moves in with her brother Patrick and his daughter Jilly who live near Gulfstream.

This is a very good racetrack-themed mystery that's only marred by the main character being attracted to two men at the same time. That's mere personal preference; however, so if you do prefer romantic triangles you'll have even more reason to enjoy Flamingo Road.

Sasscer Hill has created an excellent racetrack setting with doping schemes to improve the horses' performances on the track, gamblers whose greed leads them to form syndicates looking for the next big drug that will escape detection by organizations like the TRPB, and owners who want to turn over a fast buck and refuse to spend time or money on their horses if they don't win races. Racing can be a cutthroat business, and Hill portrays this very well indeed.

She has also created a topnotch main character. The murder of her horse trainer father still haunts Fia McKee, but she is one sharp, gutsy person when it comes to working undercover. One of the things I like the most about her is that she doesn't run around taking one unnecessary risk after another-- she uses her head.

I enjoyed this fast-paced mystery that looks deep into the heart of horse racing, and I'm looking forward to Fia's next investigation.