Tightening the Threads by Lea Wait 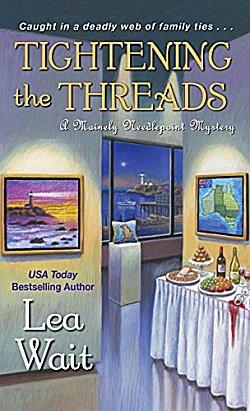 First Line: Haven Harbor's streets and yards were littered with green leaves that had fallen too soon.

If there's one thing Sarah Byrne, the antiques dealer from Australia, has been keeping close to her chest, it's her past. Even friend and fellow Mainely Needlepointer Angie Curtis doesn't have a clue. But now Sarah has the one thing she's always wanted: family, in the form of wealthy elderly artist Ted Lawrence who owns an art gallery in Haven Harbor.

Ted and Sarah are ready to announce their secret to the rest of Ted's family, and Ted has called all his children home for the occasion. Unfortunately, those adult children of his aren't thrilled with Sarah-- especially when Ted announces that he's going to change his will. When Ted is poisoned at the family lobster bake, fingers begin to point at Sarah. Angie has to work fast to prove her friend's innocence.

It's now fall, and Angie Curtis has seen a lot of death in Haven Harbor in the four months she's been in town. As much as I like this series, I think she should take a trip back to Phoenix for a while where a dead body or two won't have as much impact. In Tightening the Threads, Angie comes across a mystery of her own while clearing a huge tree that fell during a storm, but her best friend's dilemma takes priority.

For those of you who, like me, enjoy Lea Wait's ensemble cast in this series, you won't find much of them here, except for Dave whose poison garden comes in handy for answers to some of Angie's questions. The action has Sarah front and center over a long weekend. Although the truth behind her relationship to Ted Lawrence is really interesting, as the family dynamics unfold Ted is seen as a rather despicable man. His children have all gone their separate ways, haven't kept in touch with each other, and don't really seem to care about each other-- which points to something in the solution to the murder that rang false with me, although I can't talk about it without giving things away.

Tightening the Threads isn't the strongest book in this series, but it's still a good read. I love Wait's blend of setting, art, history, and Maine traditions; they all create the perfect backdrop for a cast of characters I've grown to care about a great deal.