The Devil's Feast by M.J. Carter 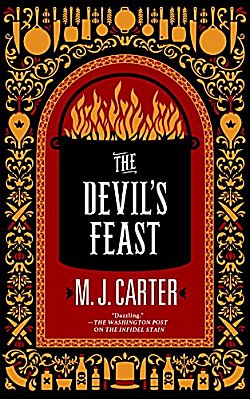 First Line: The fire in the grate had burned down to a series of glimmering embers in among the drifts of ash, and the room was now dark, save for the candle.

In the London of 1842, the Reform is the newest and grandest gentlemen's club which caters to those whose politics are of the liberal sort. When one of the Reform's members dies horribly on the premises, Captain William Avery is persuaded to investigate. The club is only days away from an extremely important dinner, so it's vital that the entire episode be hushed up as quickly as possible.

Avery, working without his mentor and partner Jeremiah Blake, finds himself up to his eyes in rivalries and hatreds, and not all of them are political. The chef in the renowned kitchen of the Reform is none other than Alexis Soyer, "the Napoleon of food"-- a man whose culinary brilliance is matched only by his talent for self-publicity. Avery could certainly use Blake's help.

In this third Blake and Avery historical mystery, Blake is in a pickle, and this means that young Captain William Avery must be in charge of the investigation at the Reform Club-- something that goes quite against Avery's grain since he is politically conservative. Once again M.J. Carter has created a rich, layered mystery that's even more savory than the dishes that Chef Soyer (an actual person) was known for. The Devil's Feast kept me guessing from first page to last because it takes Avery a very long time to ascertain the true focus of the deaths. Are men being poisoned because of their politics? Is it because of that important dinner? Or does it have something to do with London's first celebrity chef, Alexis Soyer? Avery finds that puzzle very difficult to solve-- especially since he's in danger of being poisoned himself.

And while Avery is trying to solve this mystery, he's trying to help Blake, and he's also being forced to deal with an increasingly difficult wife. Fortunately Avery does have the help of young Matty, the girl readers first met in The Infidel Stain. She not only provides Avery with a great deal of help (risking her own future to do so), she is a mirror in which readers can see the true Victorian London, a city with debtor's prisons and a great divide between the haves and the have-nots. Matty and Blake (who has more of his childhood exposed) are teaching Avery valuable lessons in the true ways of the world.

But The Devil's Feast is no mere fascinating Victorian exposé. Foodies will love the insights into cooking for a prestigious gentlemen's club, and the fast-paced mystery will delight all those who enjoy solving a cracker jack of a puzzle. Carter's Blake and Avery series started out strong and it's getting stronger with each entry. I can't wait to see what's in store next!