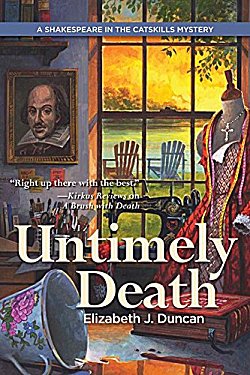 Once the costume mistress of the fabled Royal Shakespeare Company, Charlotte Fairfax now plies her trade at a down-at-heels Catskills resort in upstate New York. Jacobs Grand Hotel has been making a comeback of sorts with its productions of Shakespeare's plays.

When the leading lady of the upcoming production of Romeo and Juliet is murdered, Charlotte stitches herself right into the very heart of the investigation to find Lauren Richmond's killer.

If you're a fan of the film Dirty Dancing, it will be difficult for you to read Untimely Death and not think of Kellerman's. In Elizabeth Duncan's first Shakespeare in the Catskills mystery, resorts like Kellerman's have had decades of hard times. Many have not survived. The only reason why Jacobs Grand Hotel is still alive is due to the Bard. In fact, they just might be able to start gathering together the needed money to begin badly needed renovations. Charlotte Fairfax is one of the main reasons why Jacobs has begun to make some money again. With her impeccable training, she knows how to make each and every penny of the costume budget count. One of the pleasures in reading this book was imagining Jacobs being brought back to life, and I hope we're able to see this in upcoming books in the series.

Charlotte the Englishwoman has spent the past decade enjoying her quiet life in the country. Her boyfriend is the chief of police, and I loved every speck of the lore of costume design that she imparted to the intern working with her. The only thing I didn't like involved Charlotte and a piece of evidence-- I couldn't believe that she'd do such a thing!-- and I hope never to see a repeat of her actions.

I found lots to like in this new series. The characters, the setting, the mystery, costume design, and stagecraft.... I'm really looking forward to going back to the Catskills!

Cozy Mystery, #1 Shakespeare in the Catskills mystery
Rating: B
Source: Purchased from Amazon.