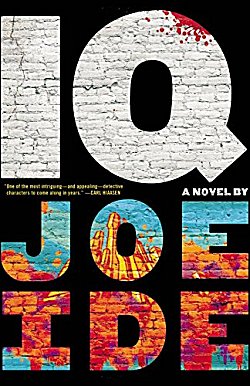 First Line: Boyd parked his truck across the street from the school and waited for the bell to ring.

The Los Angeles Police Department can't keep up with crime in East Long Beach, but someone in the neighborhood has decided to solve the cases the police can't or won't touch. Those in the know call him IQ. His status as a loner and high school dropout disguise his fierce intelligence and determination. He charges his clients whatever they can afford to pay, whether it's a set of tires or a homemade casserole, but to make ends meet, Isaiah Quintabe must take on the occasional client who can pay him in cash.

This time the paying customer is a millionaire rapper whose life is in danger. The more Isaiah digs, the more people he encounters who want the man dead-- including a hit man universally acknowledged to be a lunatic. It's not going to take IQ long to discover that the price of this investigation may be higher than he can afford to pay.

From the very first pages of Joe Ide's debut novel IQ, I was in inner-city Los Angeles. From my safe fly-on-the-wall perspective, I found Isaiah's neighborhood to be alien, fascinating, and uncomfortable-- and I didn't want to stop reading. I witnessed this young man's transformation from a scared, grieving boy in the traumatic 2005 aftermath of his brother's death to a private investigator for the disenfranchised in 2013.

One of his clients paid him with a rooster Isaiah names Alejandro, and he gets along better with the chicken than he does with most people, including Dodson, who worms his way into Isaiah's apartment and his business. One of the strengths of this book is that we never really know whether Dodson is just another drug dealer or an actual good guy.

Ide's story kept my interest from first page to last, but what gave it an emotional depth  was Isaiah's fight to uphold the teachings of his beloved older brother, Marcus. How many children in inner-city America are taught what Marcus tries to instill in Isaiah:

You could make a difference, Isaiah. A big difference. I'm talking about raising people up, easing their suffering, bringing some justice to the world. Money don't enter into it, you understand what I'm telling you? God didn't give you a gift so you could be a hedge fund manager.


What makes IQ real is the fact that Isaiah doesn't always measure up to Marcus's expectations. I was only a couple of chapters in when I began hoping that we'd hear from Isaiah Quintabe again. When I closed the book after reading the last page, I felt the exact same way.  Joe Ide has created something special.