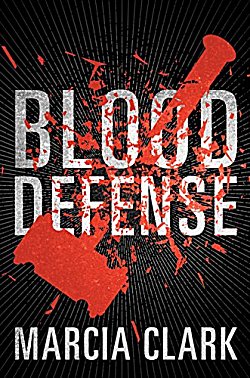 First Line: I raced in the studio and hopped into the empty chair in front of Bonnie, the makeup wizard.

It's a struggle for criminal defense attorney Samantha Brinkman to keep her fledgling practice afloat, but when she gets the chance to take on a high-profile double-murder case on her home turf in Los Angeles, she almost turns it down. Although one of the victims is a beloved television star and the case could easily make her a media sensation, the person Samantha would be defending is an LAPD detective-- and she has little use for the police.

Even though she has doubts about the decorated veteran cop's innocence, she and her two associates need the money and the exposure. In no time at all, Samantha's pulling out all the stops to find evidence that will clear her client's name. But when a shocking secret comes to light, Sam realizes that the man she's defending may be one of the most dangerous sociopaths she's ever encountered.

Marcia Clark's first Samantha Brinkman mystery uses the author's prior experience as a criminal defense attorney. Blood Defense is a fast-paced story with a plot that kept me guessing, and it certainly doesn't lack in verisimilitude. However, there was "too much middle" which did slow down the action a bit until the explosive ending.

The secondary characters all seemed rather one-dimensional, too. This is definitely Sam's show. She is a nuanced, fascinating character, but unfortunately, I could never warm up to her. Sam always has one eye on the percentages and keeps close tabs on what she can reap from every sentence she speaks, every smile she bestows. Useful for a lawyer who's trying to get her practice off the ground, but not the sort of person I enjoy being around. There's also another reason why I didn't warm up to Sam. I can't go into this reason in any depth because I would reveal too much of the story, so I'll just say that she makes several morally ambiguous choices that I don't agree with.

With the exception of a slightly sagging middle, this is a good legal thriller; however, its main character will keep me from reading further in the series. (Perhaps I'm more prosecutor than defense attorney.)