Deck the Hallways by Kate Carlisle 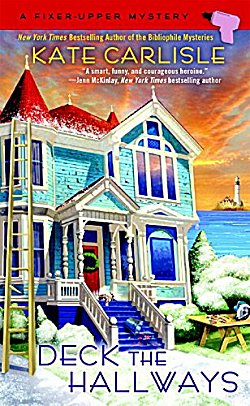 First Line: "Merry Christmas, Shannon!" my elderly neighbor shouted as I backed my truck into the street.

All of Lighthouse Cove has turned out to help contractor Shannon Hammer transform a grand old Victorian mansion into ten apartments for homeless families in time for Christmas. Even Shannon's father Jack is there to lend a hand.

Unfortunately Jack gets into a heated argument with the man who's backing the project, and when the man is found murdered, guess where that puts Jack? Yes, right in the crosshairs of the police as Suspect #1.

Now Shannon not only has to get this project completed within deadline, she's got to find a killer before her father winds up in jail.

When one of the characters in Deck the Hallways looks at Shannon and says, "You lead the most interesting life," I just had to laugh. It's true. Shannon Hammer certainly isn't your typical contractor, and this latest Fixer-Upper mystery is filled with all sorts of things happening to her. There's that group of Santas who insist on helping out at the jobsite. There's Shannon's relationship woes, and I'm not about to get into the strange things that turn up in the bed of her truck.

Even though I correctly guessed the identity of the killer the second time the person made an appearance, it didn't spoil this book for me. For one thing, I was too busy picturing the conversion of that grand old house into apartments. For another, I was watching Shannon teach her skills to local young people. Shannon is invested in her community, and for me, this is one of the things I like most in this very enjoyable series.

Like all well-written cozy mysteries, Deck the Hallways has much more to it than trying to guess whodunit. Well-developed characters, lots of humor, a tease of romance, and a hearty dose of home renovation makes this Fixer-Upper series one of my favorites.