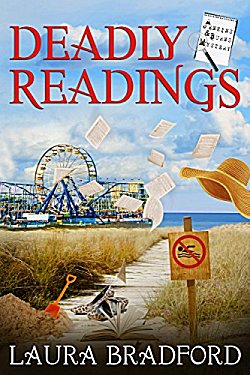 First Line: It had been one of those days that made him doubt his decision to become a cop.

The discovery of the body of a young woman is just the first in a string of seemingly random and senseless murders that has the Jersey Shore town of Ocean Point on edge. The only thing that connects the murders is a warning from a boardwalk fortune teller.

The livelihood of the town relies almost solely on tourism, and it's local detective Mitch Burns' job to track down the killer. Newly hired reporter Elise Jenkins has put a couple of clues together on her own and shared her conclusions with Mitch. Now they're both working to solve the crime before another body is found.

Originally published as Jury of One, Deadly Readings is a good solid debut mystery. The book's Jersey Shore setting rang true to this fan of Chris Grabenstein's Ceepak and Boyle mysteries. When tourist dollars are involved, solving crime quickly is the name of the game.

Elise Jenkins and Mitch Burns are the two main characters in this book, and they are almost too good to be true. I almost wanted to rough them up with a fault or two to make them more realistic. However, what really frosted my cake was the fact that the newspaper Elise works for is 100% ethical, and this proves that paying attention to the real world has made me too jaded and cynical.

But you know what? It was nice reading about a newspaper staff that believed finding a killer was more important than the headlines it could grab. It was nice reading about a newspaper reporter who worked with the police instead of against them. Although whodunit was a bit too easy to deduce and there were a couple of questionable procedural issues in Deadly Readings, it was still an enjoyable read for this old cynic. I may just have to track down more books in this series!