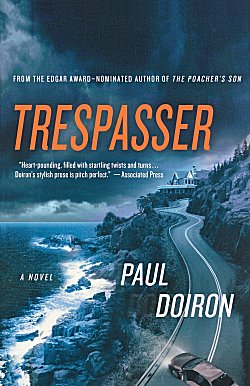 It's the end of game warden Mike Bowditch's shift when he gets a call concerning a woman who's hit a deer with her car on a lonely road. She needs assistance. However, when Bowditch gets there, there's no deer... and no woman. The only thing left is some blood on the road. Even the state trooper who also responds to the call seems to think nothing is really wrong.

However Mike can't get over the feeling that something is wrong, and when the missing woman is found, she's been brutalized in such a manner that it reminds him of Erland Jefferts, a man who's spent the last seven years in prison for a similar crime. Was Jefferts framed? Is there a copycat? When Bowditch begins looking into the case, state prosecutors tell him to back off.  But he can't, and his off-the-books investigation is going to put not only his life but the life of the woman he loves at risk.

It's a scant few months since the action in Doiron's first mystery, The Poacher's Son, and Mike Bowditch is fighting the backlash of local opinion. It's mud season in Maine and the author skillfully turns this fact into an extremely evocative setting. (I'm still fighting the urge to run out to the porch and clean my boots.)

Doiron has written a very strong mystery, and at its heart is the complicated twenty-five-year-old Mike Bowditch. Mike is quite observant, at one point telling someone who's trying to pull the wool over his eyes, "You can't have it both ways." But he's also emotionally stunted, due in part to his childhood. This causes him to behave like a teenager occasionally, so it's an interesting-- and sometimes frustrating-- mix of intelligence, determination, and adolescent angst. He certainly keeps this reader on her toes.

And he will continue to do so. I've become hooked on Doiron's storytelling ability and his love of wild spaces, so I'm happy to report that it's on to the next book in this series.