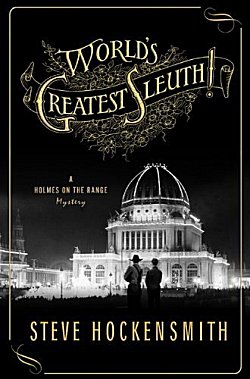 First Line: My heart wasn't just pounding in my ears as we ran.

When the Amlingmeyer brothers receive an urgent summons from Otto's ("Big Red") publisher, the next thing they know they're on a train bound east to Chicago and the World's Columbian Exposition. Big Red and "Old Red" (Gustav) are set to compete with some of the most famous detectives in the world in the World's Greatest Sleuth contest which coincides with the last days of the first World's Fair and the publication of a story which will reveal the death of Sherlock Holmes.

The competition has barely begun when the organizer of the contest is found murdered-- face down in the Mammoth Cheese from Canada. From there on out, it's hard to keep Old Red in the contest when there's real detective work to do.

I've been holding on to the World's Greatest Sleuth like it's gold. This is a volume from one of my "Reliables"-- a mystery series so good that I keep myself from reading through it as fast as I can go. I didn't want to read it and be forced to admit that the series was at an end. But I recently learned from the author that there will be new Holmes on the Range mysteries coming in the future, and this allowed me to enjoy watching the Amlingmeyer brothers in action once more.

Hockensmith gives us a good look at the World's Columbian Exposition through the eyes of Big Red and his curmudgeon of a brother. Through them, we see the "White City" in all its majesty and absurdity-- and usually at a gallop (or at least a fast run). There are lots of laughs at the Amlingmeyers' expense, but they're used to it, and when readers pause to inhale so they can laugh again, they just might notice that Hockensmith has written a first-rate mystery, too.

That World's Greatest Sleuth competition is an interesting one with the death of its biggest detractor (a bred-to-the-bone Sherlockian purist) at its heart. Something tells me that the author has probably had more than one encounter with those pesky Sherlockian purists since he began writing this series.

If you're not too much of a purist and can accept the presence of an illiterate cowboy as an Old West Sherlock Holmes, you are going to love this book (and the series). Hockensmith has a smooth writing style that knows how to tell a strong tale, make readers laugh, and give them a true feel for the wild, wild West-- all at the same time. I can't wait for the next installment!