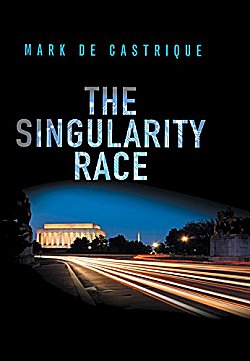 First Line: FBI Special Agent Kim Woodson kicked the wipers up a notch in the futile effort to clear the falling snow off her windshield.

Rusty Mullins is an ex-Secret Service agent who swore to stop risking his life on assignments, but when he's asked by his good friend to guard a Chinese scientist during a conference, he can't say no. It's just routine after all. When a team of assassins breaks into the hotel, Mullins has barely enough time to get Dr. Lisa Li out safely. Now Mullins is being asked to find the power behind the assassins. Is it local, or is it international? When eccentric tech billionaire Robert Brentwood asks him to continue to guard Li while she works on Brentwood's pet project, Mullins agrees as long as he can use Brentwood's resources to keep running his investigation. Little does he know that he's not only putting his own life on the line but the lives of Dr. Li and his own family, too.

Mark de Castrique's standalone thriller is fast-paced and absorbing, filled with hair-trigger action and cross after double cross. With the rise of computers, information warfare is "where it's at," and the need for a super computer with moral parameters is a must. I grew up on Sci-Fi movies about computers taking over the world and making Orwell's 1984 look like a walk in the park, so I definitely found The Singularity Race to be an interesting read.

Normally I am a character-driven reader, and de Castrique's characters do not disappoint-- from Rusty Mullins to Dr. Li and Peter Wang to Brentwood the eccentric billionaire; however, I do think the story could have used a bit more about the computer that was being built. It stayed a bit too much in the shadows when it could've given the book more substance.

If you like your mysteries and thrillers with a bit of science fiction, I think you should give The Singularity Race a try.