Karin Slaughter at The Poisoned Pen! 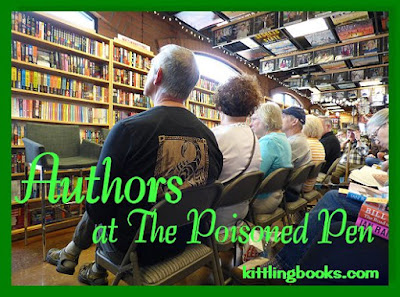 Originally the author event for Karin Slaughter was to be on the Monday of the first presidential debate, but The Poisoned Pen's Barbara Peters and Karin Slaughter herself decided it would be better to hold it on Sunday instead, so... doublechecking email and calendar before walking out the door, I headed to my favorite bookstore. Slaughter is an author who's appeared at The Poisoned Pen for every one of her books, but I'd never read one-- or seen her. I began to opine-- as I did for Linda Fairstein-- that I may want to rethink that. After reading a digital short story that sets up her standalone Pretty Girls perfectly, I knew that going to this event would seal the deal. It did. When all was said and done, I walked out of there with my purchase of a Karin Slaughter novel.

After seeing rich athletes win lawsuits when accused of rape, Slaughter wanted to write about "the wealthy world that can buy its way out of trouble." When Peters mentioned Atlanta, which is the setting for Slaughter's book, Karin gave us a few unwelcome facts. There is more pay equality for women in cities. There is also a better chance for women to be murdered, and a higher incidence of domestic violence against women in cities. Rather sobering, isn't it? But on the other hand, when a famous athlete is accused of rape, the woman who is the accuser is practically "run out of town on a rail."

Barbara brought up a time that she was in a room with several of the Los Angeles Lakers and the way that women fought to be noticed by them. "Women want to be noticed by celebrities, but they don't want anything bad to happen," she said. "All women want that," replied Slaughter, who has a perfect deadpan comedic style.

Karin went on to say that rape cases can be difficult to prove, and many police officers have not been properly trained to investigate them. "Something is wrong," she told us. "In the 1980s, one in twenty rapes were successfully prosecuted. Now it's only one in fifty."

She believes that one way this can be turned around is by getting men involved so they can recognize behaviors, language, etc. "What most people don't realize is that, after a woman has been raped, the person she was before is gone."

When Barbara said that Karin has put her main character Will Trent through some horrible things, the author agreed. "Did you know that 65% of boys who go through the foster care system wind up in prison?" Karin asked. "Will and Angie both had horrible childhoods. As a result, Angie punishes others while Will punishes himself."

Then Barbara brought up another character, Jeffrey. "I had to kill Jeffrey," Slaughter said, "because he was getting too happy. It was almost like writing fantasy. He picked up his socks, he did the dishes, he took out the trash...."

When the conversation went back to the book's Atlanta setting, Slaughter told us that "Atlanta has the largest African-American middle class in the U.S. A lot of cities in this country are based on race. Atlanta is based on money."

Peters brought up the fact that The Kept Woman isn't solely about the rape case; it also has a lot to do with family. "I love weaving together all these stories," Slaughter said. "This is the first book since Triptych that shows that Angie really knows how to push Will's emotional levers."


Pretty Girls was the first book Slaughter wrote with her new publisher. "It was a fun book to write," she said. "Since the two main characters are sisters, I used actual arguments I had with my own sister. When she said anything about it, I suggested that she write her own book.

"I also liked writing a book that did not feature cops. My next book has something to do with lawyers."

Barbara Peters then mentioned something that sounded as though it could be a lot of fun. She's toying with the idea of authors interviewing other authors at the bookstore. For example, Linda Castillo has made it clear that she'd love to come to The Poisoned Pen and interview Lisa Gardner. Peters has seen Slaughter and John Connolly work together, and she told us that the two make a perfect comedy team. When she said something about trying to get Slaughter, Connolly, and Mark Billingham together, I must've had an interesting look on my face because Barbara made mention of it.

Karin Slaughter and Barbara Peters have had-- as Barbara puts it-- "sixteen years together. Rob and I took you to dinner at the Metropolitan Museum of Modern Art before your first book was published."

Karin writes in a cabin built for her by her father in north Georgia. She spends a lot of time there alone. "There's no internet, but I do have cable TV; I'm not going to live like an animal. This is what works for me. You hear about writers who work in coffee shops. I just can't do that."


Karin may have a quirky sense of humor, and she may speak well in front of audiences, but as she says, "I'm extremely introverted. I scared the crap out of Carol Burnett once, but that's another story. I did meet one of my favorite authors. I think I went all-out fan girl... never knowing that this person was extremely shy." Slaughter has made a point of being very careful about that ever since.

"It took five years for my German publicist to realize that I don't want to go to bars after events. I want to go back to my room and read quietly. I need to recharge."

When asked during the event-ending Q&A, Slaughter told us that the hardest part of writing for her is writing an ending that is as good as the beginning. "I probably work harder on the ending. The beginning is the fun part."

The entire event was the fun part for me, and I'm going to include the Livestream video now. You can see and hear every bit and glean such goodies as (1) Barbara's definition of literary fiction, (2) Yrsa Sigurdardottir's research into a unique way of killing people, and  (3) get a good shot of the back of my head. Who could ask for anything more?


Since these things don't always work, I'll also include the link so you have the option of going directly to the source: Karin Slaughter on Livestream.