The Heavens May Fall by Allen Eskens 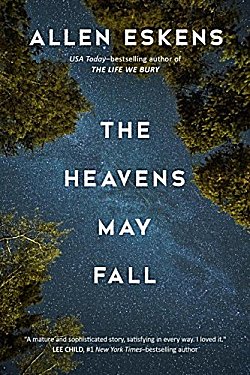 First Line: The courtroom had fallen quiet, the judge's words lost behind a low hum that droned in Max Rupert's ears.

Minneapolis Detective Max Rupert is convinced that Jennavieve Pruitt was killed by her husband Ben. His longtime friend, attorney Boady Sanders, is convinced that Ben is innocent-- so much so that he is now Ben's lawyer. As both the case and the trial unfold, Max and Boady find themselves being put through a wringer.

For Max, this case is stirring up memories of the death of his beloved wife. For Boady, it's the first time he's taken on a defense case since the death of an innocent client. With student Lila Nash's help, Boady is determined to redeem himself for his past failure.

Told from two differing points of view, author Allen Eskens takes characters from his previous two novels (The Life We Bury, The Guise of Another) and weaves some literary magic. The title is from a Latin phrase: Fiat justitia ruat caelum-- Do justice though the heavens may fall. Max and Boady are both men who are committed to justice. When Boady explains the phrase ("If a person is ever presented with the choice, that person must always do what is right even though it may bring on great personal loss"), I got chills. Both men are capable of putting it all on the line to do the right thing, and they're on opposite sides in this case. What is going to happen?

I like Eskens' approach to writing a series. It's not exactly linear. Instead, he takes characters from previous books and puts them in different pairings and different scenarios in each successive book. It works. The writing is elegant, tightly woven, and swift moving. Moreover, if you're a character-driven reader, you're going to love him. Eskens' characters are flawed yet strong, and their emotional turmoil can be as visceral as a punch in the gut. It's altogether too easy for me to put myself in Max and Boady's shoes and feel everything that they do. I become lost in the world the author has created.

The story is brilliantly told. The two points of view do double duty: letting readers know what Max and Boady are doing while keeping us off-balance. And the ending? You're just not quite sure how things are going to turn out until they actually do.  Allen Eskens is a lawyer who knows how to write, and he has the awards to prove it. (With more to come if I'm not mistaken!) Do yourself a favor and read him!