The Frozen Shroud by Martin Edwards 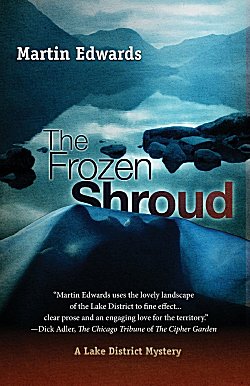 First Line: "Do you believe in ghosts?" Miriam asked.

The Faceless Woman is said to walk through the small Lake District community of Ravenbank on Hallowe'en. The first time was just before World War I when a young woman's corpse was found with a shroud frozen to her shattered face. Just five years ago another woman was murdered and her bloody face covered with a shroud.

When historian Daniel Kind is invited to a Hallowe'en party at Ravenbank, he looks forward to it simply because he is a specialist in the history of murder. Are the age-old rumors true as to the identity of the real killers? Kind may have an opportunity to find out because once again Death is stalking Ravenbank.

Martin Edwards' rock solid Lake District mystery series has one of those will-he-won't-she relationships that are practically irresistible when the characters involved are as winning as historian Daniel Kind and Detective Inspector Hannah Scarlett. The two of them have been dealing with inappropriate partners, misread cues, and conflicting workloads for six books now. I'm happy-- but hesitant-- to report that there may be a light at the end of their tunnel.

It's not going to be easy. Daniel is very nervous about not wanting too much too soon from Hannah, and Hannah is still trying to drill it into her former partner's head that the party is over while simultaneously dealing with crippling staff reductions on the police force.

Both Daniel and Hannah are complex, interesting characters, but I have to admit that I think The Frozen Shroud's story let them down a bit. For one thing, too many personal problems were settled with happy coincidences, and for another, it was too easy for me to deduce whodunit.

Be that as it may, I still enjoyed reading the book as the next chapter in the lives of two characters I've grown to care for very much, as well as for its creepy atmospheric setting. I'm looking forward to book number seven.