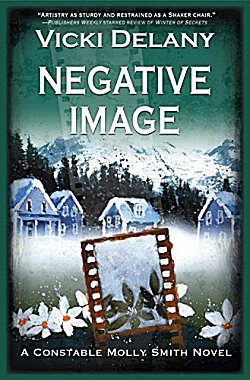 First Line: Rachel Lewis knew she was pretty, but she also knew that being merely pretty wasn't good enough.

Winter is slowly leaving the mountain town of Trafalgar, British Columbia when a famous photographer arrives to do a feature on tourism. Although he's accompanied by his talented assistant and a sexy young wife, this photographer is more interested in reconnecting with the woman who left him twenty-five years ago.

When the photographer is found dead in his hotel room, no one is more surprised than Sergeant John Winters to discover that one of the principle suspects in the murder is his own wife. With the Royal Canadian Mounted Police in charge of the investigation, Winters must decide which is more important to him: loyalty to his job... or loyalty to his wife. While he's deciding, he's going to discover that he doesn't know his wife nearly as well as he thought he did-- and there's very little that Constable Molly Smith can do to help. Her own plate is filled with a series of B&Es, a boyfriend who's causing more problems than he's solving, and a tragedy that will strike right at the heart of her own family.

Vicki Delany's Smith and Winters mysteries are a perfect combination of characterization and story. Molly Smith is the rookie who's learning the job. Her parents have a difficult time dealing with her chosen occupation. Molly's boyfriend Adam wants to be the most important person in her life and is causing her nothing but trouble on the job. Fortunately, she has someone like Sergeant John Winters to mentor her. Winters is a wealth of knowledge and common sense, and he sees Molly's potential. He's also emotionally stable-- or he was until his wife becomes the prime suspect in a murder.

It's interesting to see how Winters reacts to learning about his wife's past. He may be a hero, but heroes don't always react the way we want them to, and Delany reminds us of this more than once. Molly's life is tied up in knots with career decisions, gossip, and a stalker. She takes this all on by herself because of the way her fellow officers are treating her. Being a female police officer is certainly not easy.

Speaking of certainties, Delany really knows how to ratchet up the suspense. Investigations are being conducted by officers who have their own agendas. Bad things are happening to good people right and left in Negative Image, but the author shows that good police work relies on the boring stuff: going back time after time to ask the same people the same questions and observing every little nuance of behavior. Delany has created a solid mystery that keeps readers guessing. Not only that, but she's created wonderful characters that live and breathe on the page. So much so that fans will have their hearts in their throats through sections of this book.

If you haven't read one of Vicki Delany's Smith and Winters mysteries, I urge you to do so. Please start at the beginning with In the Shadow of the Glacier so you don't miss one single bit of her character development (or any of the mysteries).