What Gold Buys by Ann Parker 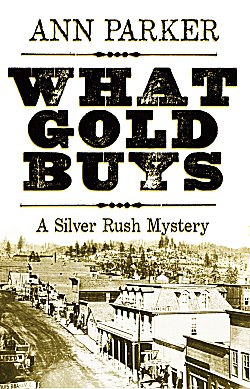 First Line: It was hard to find somewhere close by the crowded silver mining boomtown to practice killing a man, but Antonia was nothing if not determined.

It's autumn 1880 high up in the Rocky Mountains, and saloon owner Inez Stannert has returned to Leadville, Colorado.  In a boomtown like this, people are after all the riches they can get, whether it be valuable ore dug from the ground or more spiritual rewards. Drina Gizzi has brought her young daughter Antonia to Leadville at the instruction of her lover and benefactor, Mr. Brown, but Mr. Brown has vanished, and Drina tells fortunes in an attempt to put food on the table in their tiny shack in the worst part of town.

When she is found murdered, the only people who seem to care are the three people who found her body: Inez Stannert, the Reverend Sands, and little Antonia, but what astonishes everyone is the disappearance of Drina's body. Inez bands together with young Antonia to find the killer, and they uncover a rat's nest of motives and underhanded dealings. Moreover, Inez has her wayward husband Mark to contend with. Mark is determined that Inez stop her plans for divorce, and he'll stoop as low as he can to see that come to pass. Inez has a lot on her plate. Can she identify a killer, make the right decision for her future, and keep both Antonia and herself alive? Only time will tell.

I've enjoyed Ann Parker's Silver Rush mysteries since the very first one,  Silver Lies. Parker brings a mining boomtown to boisterous life-- to the point where you can picture yourself amazed at the noise while dodging horse-drawn freight wagons and trying not to lose one of your boots in the mud.

Parker has created a main character with a very unconventional lifestyle. Inez Stannert owns a saloon. She's trying to get a divorce from her charming con man husband who abandoned her for almost two years. She's also having an affair with another man. This is complication enough, but Inez also manages to solve murders at the same time. Needless to say, she is a strong woman, and it's interesting to see how other characters view her throughout What Gold Buys.

But Inez is not the only person trying to forge a decent life for herself. For me, the character of young Antonia was the best in the book. She doesn't believe in the mumbo jumbo that her mother spouts in order to earn money. She doesn't believe Mr. Brown ever intended to join them in Leadville, but just in case he does show himself, Antonia has plans for him. This little girl has gotten the short end of the stick her whole life, but she's got enough gumption to share with a dozen other children. I loved her.

The guilty parties are relatively easy to spot in What Gold Buys, but that's really not the focus of the mystery. It's the How, and the Who Did What that's not so easy to deduce.

Ann Parker's Silver Rush series is perfect for you if you love old mining towns, historical mysteries, and a strong female main character. It is possible to read What Gold Buys without reading the rest of the books in the series, but don't be surprised if you find yourself tracking down the others.