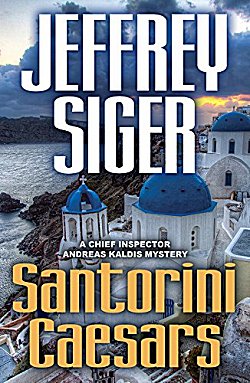 First Line: Santorini stands as the southernmost of Greece's Aegean Cycladic islands, one hundred forty-five miles southeast of Athens, eighty-five miles due north of Crete, and slightly smaller than the American island of Manhattan.

Athens is a hotbed of protests and demonstrators. When one of the young demonstrators is assassinated, Chief Inspector Andreas Kaldis is convinced that the young girl's death was meant as a message. All he and his team have to do is figure out who sent the message and to whom the message was sent.

The search leads them to the gorgeous island of Santorini-- in legend, the lost island of Atlantis. There on the island a secret gathering of Greece's  top military leaders is looking to come up with answers to the monumental government crisis which faces their country. What are they up to?

As suspects emerge and international intrigues evolve, Kaldis finds himself facing a situation that only he can stop. As the birth if their second child grows closer, Kaldis and his wife know that better days for their country will not be coming any time soon, and they have to wonder-- does carrying on the good fight really matter anymore?

Siger the Soothsayer has the uncanny knack of foreseeing chaos in the beautiful country that is Greece and then writing about it in such a way that readers see and hear and taste and feel that turmoil. I rely on his Chief Inspector Kaldis books to learn about Greece, its history and landscape, as well as get a true picture of its government. Now Kaldis is showing us that other countries are taking advantage of Greece's dire economic straits and its corrupt politicians. This makes for some nail-biting plots.

Fortunately Kaldis is now a family man. He has a beautiful wife and son with a second baby on the way. This has given him more important responsibilities, and I'm happy to see him less in the middle of deadly action and more in administrative mode which lets his leadership and analytical skills shine. It also has the added bonus of allowing other characters a turn in the spotlight-- and believe me, Jeffrey Siger's series is not a one-character show.

His team works together like a well-oiled machine-- well-oiled with intelligence, good food, and lots of humor. Maggie is the world's best secretary, and Kaldis' wife Lila's common sense has helped him solve more than one investigation. Then there's the courtship of Petro and Sappho, and.... but I'm not saying another word since I don't want to divulge any secrets.

Jeffrey Siger's Inspector Kaldis books have always had a profound sense of place, and if you're wondering, the Greeks themselves love his books. Combine the author's talent for holding up a mirror to a troubled, beautiful country to his plots that make you feel as though you're getting the latest news before everyone else and add an intelligent, funny, sexy cast, and what do you have? Some marvelous reading, that's what. I never miss one of Jeffrey Siger's books. Never!