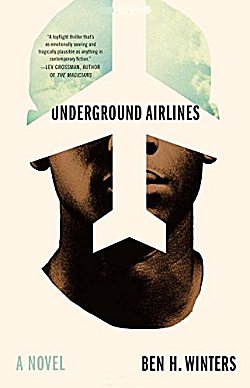 First Line: "So," said the young priest. "I think that I'm the man you're looking for."

The world as we know it is much the same in Underground Airlines: smartphones, Happy Meals, social networking. But it also has the Hard Four, European Union sanctions, and... what on earth is a Clean Hands State? You see, in the world of the Underground Airlines, the Civil War never happened, and slavery continues in Louisiana, Mississippi, Alabama, and Carolina (the Hard Four). Due to these sanctions the country's economy is crippled-- except in the Hard Four with its free labor.

Are there runaway slaves? You'd better believe it, and there are bounty hunters working for the U.S. Marshall Service to find them and take them back to their owners. Victor is a black man who keeps very busy as a bounty hunter, and his boss is determined that Victor find the leaders of the abolitionist movement called the Underground Airlines. Victor is a good man doing bad work, and as he strives to find the roots of the Underground Airlines, he's learning secrets that could very easily get him killed.

I am a fan of well-written alternative history; I suppose "What if?" has always been one of my favorite questions to ask. I have read books in which the South won the American Civil War and found those good food for thought, but this is the first time I've read one in which that war never occurred at all. Underground Airlines is thought-provoking, sometimes powerful, and often very uncomfortable reading. Uncomfortable because we are not as far removed from slavery as we'd like to think. The world Ben H. Winters has created is altogether too plausible.

But the entire story does hinge on one thing: the main character of Victor, and Victor was not a success for me.  When I first met him, I thought he was a fabulous character, and I felt sympathy for the plight of his wife. Then I learned what he really did for a living. A black man who was born a slave, won his freedom, and is now hunting people down to bring them back to slavery? It took a while for the disappointment to subside, which it did do. Winters takes us into Victor's mind, and as I learned more about him, I felt that this man was a volcano almost ready to explode.

I was primed, and I was ready for this book to take me to great places... but after the first hundred pages, it lost momentum for me. Victor lost that volcanic feeling. There were inconsistencies in the world Winters created that didn't quite make sense. There wasn't enough shown to me about life in the Hard Four. What could've been a great novel became a good one. An intriguing one.  But not quite on par with Octavia Butler's Kindred.

Fiction, Standalone
Rating: B
Source: Purchased at The Poisoned Pen.