The Question of the Felonious Friend by E.J. Copperman/Jeff Cohen 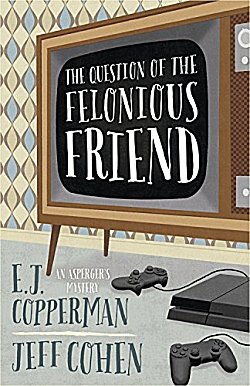 In the one year, two weeks, and three days that Samuel Hoenig has been the proprietor of Questions Answered, his objectivity-- a key component of his business's modest success-- has never been in doubt. But when Tyler Clayton, a young man who also has Asperger's Syndrome, comes in and asks if a convenience store clerk is really his friend, Samuel's objectivity seems to evaporate.

At the urging of his assistant, Ms.Washburn, he reluctantly agrees to research the answer to Tyler's question. Things rapidly head south when one of the people Samuel must interview is murdered. Now Samuel's research into friendship must also lead him to a killer because he knows that, although Tyler may be in jail, he's an innocent man.

I have enjoyed every one of Jeff Cohen's series, but I have to admit that this is my favorite. Cohen has arrived at a perfect blend of knowledge, character, mystery, humor, and heart. What a combination!

As the story unfolds, the mystery deepens. These questions are never as simple as they first appear. As Samuel uncovers more facts, it's obvious that his first hunch (the clerk is not Tyler's friend) was the correct one, but we're all left to wonder what on earth is going on. The mystery alone is worth the price of admission.

But what adds depth and heart to The Question of the Felonious Friend is the interplay between the characters. While Samuel's mother has a very small role in this book, we see more of Ms. Washburn's personal life and how Samuel reacts to it. The police in Piscataway, New Jersey, are slowly learning how to work with this young man, too. But for the first time we see Samuel in contact with someone else who's also on the autism spectrum. Tyler has not had the advantages that Samuel has. He has almost no social skills, and quickly becomes mute when stressed. Through Samuel and his relationship with Tyler, we learn how people who are on the autism spectrum should be treated... and how insensitive "normal" people usually are.

I've come to care a great deal for Jeff Cohen's characters. Their personalities and relationships are evolving with each new book. I sincerely hope that Samuel will be around to answer many more questions in the future.