The Ambleside Alibi by Rebecca Tope 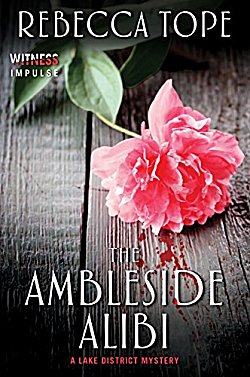 First Line: The flowers fell short of Simmy's usual standards by some distance.

Persimmon ("Simmy") Brown is slowly adjusting to life in Windermere, and she's enjoying running her very own florist's shop. But one small bouquet delivered to an elderly woman brings all sorts of secrets to light.

When another elderly woman is found murdered, Simmy is drawn right into the investigation when a suspect lists her as his alibi. The more she uncovers about her neighbors the less clear the motive becomes, but Simmy has to hurry-- the killer is dead serious about keeping those secrets buried.

I really enjoyed the first book in this series. Rebecca Tope always does a splendid job of bringing the Lake District of England to life, and she's given her main character a fine secondary cast.  Simmy is a very likeable woman with an unhappy past, and her two assistants in the shop, Ben and Melanie, are fun young people who bring their own interests and quirks into these murder investigations. This second entry also gives us a closer look at Simmy's parents, Angie and Russell.

The Ambleside Alibi was bowling along at an "A" pace when-- completely out of the blue-- Simmy has one of those TSTL moments. You've heard of those, haven't you? Too Stupid To Live? When the heroine does something so incredibly dumb that you just can't believe it. Well, that happens here, and if I didn't make such an effort not to give away the plots in my reviews, I'd be more than happy to tell you all about it... but I can't. All I can say is that I was so disgusted, I could've thrown the book against the wall-- except that it was on my Kindle, and I wasn't about to pitch a fast ball with that.

There are grave consequences to TSTL moments. So grave that I seriously doubt that I'll read any more books in this series.

Simmy, how could you?