The Lost Bird by Margaret Coel 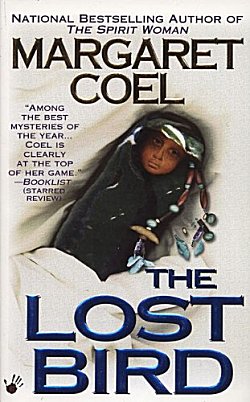 First Line: He was late.

There's a first time for everything. Father John O'Malley finally has an assistant who actually requested to be there with him on the Wind River Reservation in Wyoming. Father Joseph had been there several years ago, and most of the Arapaho remember him well. But with the good comes the unthinkable: Father John is shot dead, and since he was driving Father John's old Toyota, Father John is convinced that the bullet was meant for him.

Consumed with anger and guilt, he is determined to find the killer, and along the way he teams up with Arapaho lawyer Vicky Holden. When they discover that Father John had ties to one of Vicky's cases, they know there's no time to waste.

If you love crime fiction with a strong Native American element and you haven't read Margaret Coel's Wind River mysteries, I urge you to get your hands on them and start reading. (They're best read in order, so begin with The Eagle Catcher.) I learned about them while attending an author event in which Coel appeared with William Kent Krueger. I got the first book in the series, and I haven't looked back since.

Coel is a wonderful stylist. The Wyoming landscape, the history of the area, the characters, the mysteries, and the Arapaho culture are all woven into seamless narratives that are difficult to put down. Everything she writes has such a ring of truth to it, and so much heart that readers learn the Arapaho Way whether or not they realize it.

At the heart of The Lost Bird is a heartbreaking subject that's dealt with honestly and with great sensitivity. As the story unfolds so do more facets of the characters' lives. Father John and Vicky both have emotional revelations to deal with, and Father John also has a surprise visit from his niece Megan which will also cause him great soul-searching.

There are always many layers to these Wind River mysteries, but Coel is the type of writer who keeps a smooth pace while never wasting a word. It's taking me a while to get through this series, but that's my plan. I aim to savor each and every book... and to mourn when I finally read the last installment, Winter's Child.