The Malice of Waves by Mark Douglas-Home 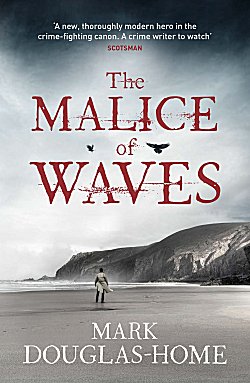 It's been five years since fourteen-year-old Max Wheeler disappeared, and his grief-stricken father is still searching for the truth. That's why Cal McGill is in the small community of Priest's Island-- he's come to see if his knowledge of the ocean and its currents can bring new clues to light.

Wheeler is not the only one reeling from his son's death. The small island community has also been torn apart by the tragedy, and by the whispers that insinuate that at least one of the villagers has to know what happened to the boy. With emotions running high, it's up to Cal to find the truth.

I love this series. Unless lightning strikes twice, it will be my "find of 2016."  Although I didn't find The Malice of Waves to be quite as mesmerizing as the first two books, it's still an excellent read and not to be missed.

Douglas-Home changes it up a bit for this third book, and it's all to do with the villagers on Priest's Island. The settings for the author's books are wonderful. You can hear and watch the sea birds wheeling in the sky overhead. You can smell the salt air and be hypnotized by the crashing of the waves. The locations come to life, but they are fictional, and I like Douglas-Home's reasons for making them so: "My reason for inventing places is to avoid imposing a fictional plot on an island community that has a rich and interesting history of its own."  Fictional or not, the landscape is breathtaking and an important part of the books.

While Cal's work with the tides does help to prove (or disprove) various theories as to what happened to the young boy's body, once again there is an environmental element to the story in the character of Pinkie Wise, a man who is obsessed with collecting rare birds' eggs. Pinkie has a small but pivotal role in The Malice of Waves. One of my favorite characters, Detective Sergeant Helen Jamieson, makes her second appearance in the series, and it was a welcome one. I hope to see more of this intelligent, fierce young woman. Both Helen and Cal are unconventional, complex characters-- one of the reasons why I like these books so much.

A strong theme throughout the book is how grief affects different people, and how it can rip families apart. I think I was so strongly opposed to the elder Wheeler's behavior that I completely forgot to keep track of the clues planted all along the way as to the killer's identity. I noticed them, but the lure of the story was too strong for me to put them all together. (Hopefully I won't have to turn in my amateur sleuth badge.)

If you love strong characters teamed with engrossing mysteries and evocative settings, Mark Douglas-Home's the Sea Detective novels are perfect for you.  They are best read in order, so please begin with The Sea Detective-- one of my Best Reads of 2016.