Anatomy of Evil by Will Thomas 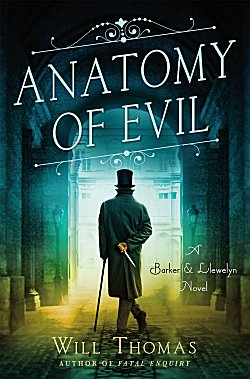 First Line: I understand it is said in scientific circles that if one attempts to boil a frog it will jump out of the pot, but if one raises the temperature of the water slowly it will never notice the difference until it is too late.

It's 1888, and the head of Scotland Yard's Criminal Investigation Department is about to take some badly needed sick leave. But first he must do one thing: make England's best private enquiry agent, Clive Barker, and his assistant Thomas Llewelyn temporary envoys to the Royal Family with regard to the series of murders in Whitechapel that are tearing the city of London apart.

So far the murderer has eluded the finest minds of Scotland Yard, but he's never had to match wits with someone as skilled and intelligent as Barker. Are Barker and Llewelyn going to be able to track down Jack the Ripper before it's too late?

The one killer in all of history who simply refuses to go quietly into that good night is Jack the Ripper. Crime fiction is awash with books about his crime spree and his identity. Most of them are forgettable, but Will Thomas's Anatomy of Evil manages to put a whole new spin on the case and becomes very memorable as a result.  How does Thomas do this?

First, he puts his very unconventional private enquiry agents (Barker refuses to be called a "private detective") Barker and Llewelyn right in the midst of Scotland Yard, combining their skills and contacts with all the information and man power that Scotland Yard has at its disposal. What the two men walk into is a jurisdictional nightmare of infighting and jockeying for position among the higher-ups. Thomas makes this much clearer than so many other fictional accounts have done in the past.

Another area in which Thomas excels is with the murder victims themselves. Many other writers have tended to list the women merely as drunks and prostitutes... and as so much dead meat. Will Thomas gives them a measure of dignity by Barker's and Llewelyn's attendance and behavior at a postmortem and a funeral. Very nicely done, even if some readers may complain that he's giving twenty-first century attitudes to nineteenth century men. People with "finer feelings" certainly existed in Victorian England after all.

The slower pace of Anatomy of Evil illustrates how exhausting it was to slog through thousands of clues and suspects while trying to prevent the very real threats of riots, pogroms, and more murders, and simultaneously sidestepping the well-meant meddling of Queen Victoria. Of course the book covers the same old ground (how could it not?), but Thomas manages to put a freshness to it that I haven't seen in a long time-- and his choice for the true identity of Jack the Ripper? Well, see for yourself!

If you haven't read a Barker and Llewelyn mystery before, and you love historical mysteries that bring Victorian London to life, you are in for a treat. Since these characters do grow and change, I would suggest that you begin at the beginning with Some Danger Involved. The only thing that's left to say is Enjoy!