Death on the Greasy Grass by C.M. Wendelboe 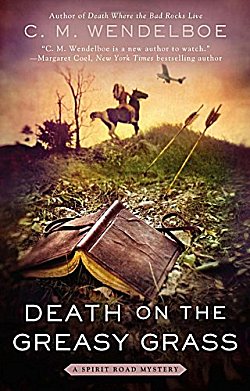 First Line: Sun-bleached wood creaked under Willie With Horn's weight as he made his way up past others who were sitting in the stands waiting for the Real Bird Little Big Horn Reenactment to begin.

FBI agent Manny Tanno is on vacation with tribal police officer Willie With Horn. In Garryowen, Montana, all Manny wants is to soak up a little history by watching a reenactment of the Battle of the Little Bighorn. Instead he's dragged right into the middle of an investigation when one of the reenactors is shot and killed.

The man who was killed had found Levi Star Dancer's journal. Star Dancer was a Crow Indian scout for Custer, and he listed a lot of secrets in his journal that the families of those involved do not want to have shown in the light of day. The dead man's willingness to sell Star Dancer's journal to the highest bidder undoubtedly led to his death. Now all Manny has to do is figure out who-- which isn't going to be easy because the killer will stop at nothing to make sure the past stays buried.

Wendelboe's Spirit Road mysteries are valuable reading on several levels. Good mysteries, vivid settings, multi-faceted characters, and laugh-out-loud humor are some of them, but the most important one to me is the chance to see the world through the eyes of Indians. (I know. I didn't call them Native Americans. Neither do they.) FBI agent Manny Tanno has worked for many years in Washington, DC, so he hasn't really been enjoying his "banishment" back to the Rez-- the Lakota reservation in South Dakota.

"Don't worry about it." Manny had heard comments like that all his life: people surprised that an Indian drove a decent car or wore neat clothes or shopped in public with children that were clean and well behaved.


Wendelboe shows us the problems that are faced every day on reservations throughout this country: domestic violence, alcoholism, unemployment, drugs. In Death on the Greasy Grass he also shows us another-- the sale of Indian artifacts-- by creating the fascinating story of an Indian survivor of the Battle of the Little Big Horn. That this survivor goes on to learn how to succeed in the white world is more than a bit gratifying.

While Manny is traveling around listening to polka music and interviewing all the suspects, we also watch women dealing with the fact that the men they love are dedicated to jobs in law enforcement that may very well kill them. This all makes for a page-turning story with a very interesting resolution. I doubt there will be more Manny Tanno mysteries, and I will miss them. This FBI agent taught me well, and he made me laugh. If you like mysteries with Indian settings, give C.M. Wendelboe's Spirit Road mysteries a try.