The Quarry by Johan Theorin 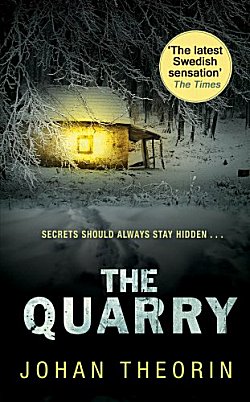 First Line: It was March in northern Öland, and the sun was shining on small, dirty-white snowdrifts as they slowly melted on the lawns at the residential home for senior citizens in Marnäs.

Gerlof Davidsson is out of the nursing home and back in his home on Öland. He's decided to read the diaries of his beloved wife who died of cancer several years before, but little does he know that his wife's words may shed some light on the goings-on among his neighbors.

Per Mörner and his son Jesper are in one nearby house. Per spends a good deal of his time visiting his critically ill daughter in the hospital and trying to avoid his father Jerry, a man that Per has always been deeply ashamed of. In the largest and most expensive home are writer Max Larsson and his wife Vendela, who grew up on the island. Max is filled to the brim with his own self-importance while his lonely wife remembers her childhood and lavishes her affection on their dog Ally. What none of them know is that a fire that kills two strangers is going to bring to light many secrets that they hoped would remain buried.

Johan Theorin is a master at setting a scene, and he brings the natural beauty of  Öland to life. He's also a master of atmosphere, and the feeling in The Quarry is one of slowly building dread. Secrets have remained buried for decades, and they are demanding to be brought out into the light.

Although this book is the third in the Öland Quartet, each one can stand alone. They are only connected by their setting and by the occasional appearance of the elderly Gerlof Davidsson. Feel free to jump in wherever you like.

Johan Theorin is a master storyteller, and I have yet to read one of his books that I did not love. He is my favorite Swedish crime writer.