Circles in the Snow by Patrick F. McManus 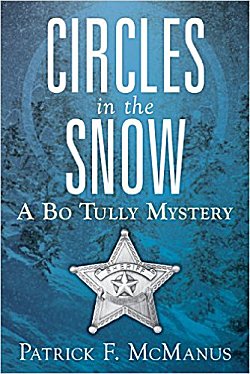 Sheriff Bo Tully of Blight County, Idaho, is seriously contemplating retirement, but he doesn't have the time to do more than gallop the idea through his mind from time to time. Someone is killing bald eagles, a widely disliked rancher has been killed-- by bow and arrow no less-- and there are perfectly round circles appearing in the snow.

Tully has a long list of suspects in the rancher's murder, several of whom lived right on the ranch with the dead man. This time putting together all the pieces of the puzzle might mean a trip to Mexico for his cantankerous father and his second-in-command. Will Bo be able to solve the crimes (and will Mexico ever be the same)?

I always know I can depend on Patrick McManus for a well-crafted mystery with a fine cast of characters and plenty of humor, and Circles in the Snow is no exception. McManus has a gift for dialogue, and his humor always stems from his characters and the situations they find themselves in; there's no clever word play or comedic set-ups.

The baffling part of the death of rancher Morgan Fester isn't who done it, but how it was done, and I often find that type of mystery more fun to solve. From the author's splendid descriptions of eagles roosting in trees to his theme of intelligence (or lack thereof) and on to the solution to the circles in the snow, McManus's latest Bo Tully mystery is just plain fun to read. I sincerely hope the sheriff doesn't  retire any time soon!