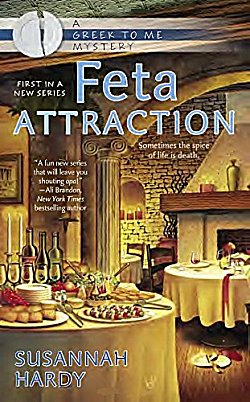 First Line: When you marry a gay man, it shouldn't come as a surprise when he leaves you.

When her husband disappears and her main competitor is killed, restauranteur Georgie Nikolopatos finds herself trying to solve a murder.

Last year I read Yarned and Dangerous by Sadie Hartwell. I enjoyed it so much that when I learned that she wrote this Greek to Me cozy series as Susannah Hardy, I knew I had to give it a try. Unfortunately this series and I are not meant to be.

I did like the interesting local history that was used in Feta Attraction, and the old octagon-shaped house made a good restaurant. The setting I liked; it was the main character and the mystery that I had problems with.

I never warmed up to the main character. For years Georgie has been stuck in a stagnant marriage where her husband thinks nothing of taking off for days to conduct his little affairs. Yes, she did stay in the marriage for the sake of her child, but letting her husband and mother-in-law take advantage of her day in and day out? I just can't become enthusiastic over a character who has DOORMAT tattooed on her forehead. (And with a life like this, is she really a proper role model for that child?)

There's also a bit too much going on plotwise: missing husband, murdered man, hidden treasure, missing money, illegal contraband, weird noises, secret spaces, and a "ghostbusting" team that really wasn't necessary at all. No, Feta Attraction just was not my cup of tea, but your mileage could certainly vary!