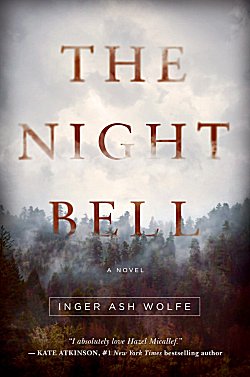 The murdered bones of children are being found on land that was once a county foster home-- land that is now a new subdivision increasingly filled with dissatisfied homeowners. When three of these homeowners are killed after the bones are found, a panic begins.

Hazel Micallef is working hard on both cases, but when her memory is jogged about the disappearance of a girl she knew back in 1959-- a disappearance that was blamed on her adopted brother-- Hazel sees this as an opportunity to clear her brother's name. This detective just doesn't know when to quit, and she's going to throw herself right in the path of an angry killer.

It's taken eight years for the pseudonymous Inger Ash Wolfe to write four Hazel Micallef books, and if this is what it takes to maintain the high quality of the series, I'm certainly not going to complain and beg the author to write faster. Fans have experienced quite a bit through these four books: superiors wanting Hazel off the force, the sixtysomething Hazel's back surgery and recuperation, Hazel's care of her mother Emily as Emily's mental and physical health continue to deteriorate, as well as a passel of hair-raising cases that would make many police officers retire. Hazel Micallef is one of the best characters in crime fiction; she ranks right up there on my list with Fiona Griffiths and Dr. Ruth Galloway. I'd no more forget to read the newest Inger Ash Wolfe mystery than I would wake up in the morning and forget to put on my glasses.

There are two crimes being investigated in The Night Bell. The present-day one is solved rather quickly and behind the scenes because it is the old case, the case that Hazel wants to solve for her brother, that is the main focus of attention. It is interesting to inhabit Hazel's childhood memories, to see what sort of little girl she was. Those memories prove to be very important in solving the case, too. Her main source of help is James Wingate who was gravely injured in the last book, A Door in the River. Wingate is supposed to be on light duty, and he certainly isn't officially on the roster, but his work is key in helping Hazel solve the cold case-- and it has a lot to do with the fact that Hazel is the only one on the force who believes in him.

I may have spotted the killer in the cold case early on, but that didn't matter much. When the title of this book was explained, my blood ran cold, and all I could think about was justice. Don't be surprised if you feel the very same way.

Are you new to the Hazel Micallef books? Technically you can start just about anywhere because the author does a good job of filling in enough of the backstory to keep things clear. But if you truly love unique characters and delight in watching their progress over a period of time, please start at the very beginning with The Calling. You'll be in for a treat!