Dressed to Kilt by Hannah Reed 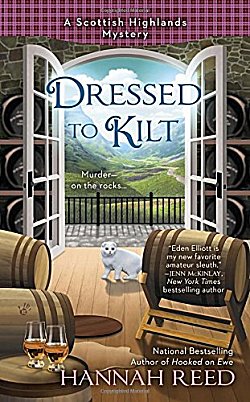 First Line: "It's like living inside a snow globe," I said to Vicki MacBride over afternoon tea at the kitchen table in my toasty warm cottage.

Well into December, it's less than a month until Eden Elliott's visa expires forcing her return to the United States. She has mixed emotions about it, but she is making plans for her homecoming. Nevertheless, while she's still in the Highlands of Scotland, she's going for the gusto-- which includes a formal whiskey tasting with the local hunk-in-a-kilt, Leith Cameron. The event turns into a disaster when a woman is found drowned in one of the vats in the distillery.

As Special Constable, Eden immediately steps in to help solve the case, but things get sticky when she realizes that the killer could be amongst the branches of her own Scottish family tree.

This tightly plotted mystery introduces readers to something that they should not miss while they are in the Highlands: the whisky distillery. Whisky is big business, and there are tours that will take you from one distillery to another, although there's no need to do that here with one right in the book.

Besides whisky, we also have samples of a truly cringeworthy Ugly American, and the fine art of writing romance novels-- which is why Eden went there in the first place. In order to solve the murder, Eden is forced to delve into her own family history whether she wants to or not, and Inspector Jamieson appears to be relying on her more and more as the series progresses. Which brings me to my sticking point.

I still can't buy into the idea that a newly-arrived American who's completely unfamiliar with Scottish law would be made a constable in the police force. Yes, it's a tiny village. Yes, she is just a Special Constable... but I just can't buy into it. However, that does not mean I can't recognize well-developed characters and finely crafted mysteries when I see them, and Hannah Reed's Scottish Highlands series is both enjoyable and well-written.