A Red Herring Without Mustard by Alan Bradley 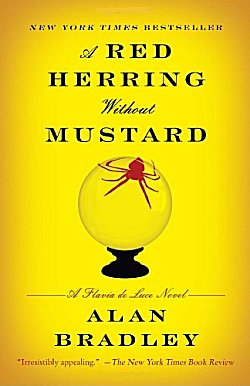 First Line: "You frighten me," the Gypsy said.

No, eleven-year-old Flavia de Luce didn't have a good experience having her fortune told in the gypsy's tent, but you could say that the woman didn't either since Flavia finds her bludgeoned body later in the victim's own caravan.

There are those who say the woman's death was retribution because they are convinced she was responsible for a child abduction years before. Now Flavia understands all about retribution due to the endless cycle of it on which she and her two older sisters exist. What she doesn't understand is how the two crimes-- one old and one new-- can actually tie together. And when Flavia de Luce doesn't understand something, she won't rest until she conducts a thorough investigation.

In this third book in the series, her family's poverty finally hits home to Flavia. In fact there's more family background altogether, especially for her mother and father, which cleared up some questions I'd had. Amidst all the gypsies, curses, stolen babies, stately home creepers, and the smell of fish is a well-paced, well-plotted mystery certain to delight all fans of this series.

Another item that I was glad to make note of is that Flavia was mostly absent from that laboratory of hers. You see, no matter how well-paced, well-plotted, and well-written this book and the series are (and they are), this only child just can't warm up to it. The relationship between Flavia and those two torturous older sisters of hers just turns me off. Concocting potions to make her sisters ill, all three of them on a senseless hamster wheel of payback... if I was a child living in that house, I think I'd run away and join the circus.

So... although I can see the good and the charm of it all, I'm going to leave this series to its many fans. Long may it delight each and every one!