Death Among the Doilies by Mollie Cox Bryan 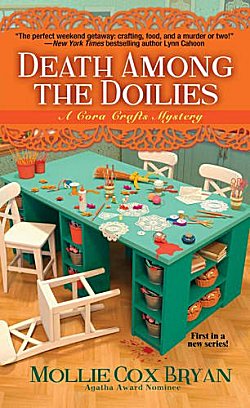 After too many years being a counselor at a women's shelter, blogger Cora Chevalier has come to Indigo Gap, North Carolina to reinvent herself. Pouring her talents and most of her savings into a craft retreat business has been a dream of hers, and she's looking forward to sharing that dream with her best friend (and resident potter) Jane Starr.

It's been a whirlwind of turning her old Victorian mansion into a crafter's paradise, booking people into her first retreat, and babysitting Jane's young daughter, so Cora doesn't have time to listen to the rumors that are spreading about the murder of the local school librarian. She doesn't... until Jane's fingerprints are found at the crime scene. With the behavior of townspeople turning ugly, Cora knows she's not only going to have to save Jane but her own reputation and her brand-new business as well.

I always pick up a book expecting it to be good, but I have to admit that I was very pleasantly surprised by just how good Death Among the Doilies is. Mollie Cox Bryan has created a strong small town setting, given the hero of her tale a wonderful old Victorian mansion to live and work in, and then peopled it with a cast of very interesting characters. Having a good mystery to solve is icing on the cake.

The main character, Cora Chevalier, is a woman that I quickly grew to like. She's a bit of an old soul, sounding as though she's in her late forties when she's actually only thirty-two. Cora has seen much too much of the ugly side of life in that women's shelter, but this is her first experience at being a business owner, and she does make some rookie mistakes.

It's those rookie mistakes that added a great deal of interest to the story for me. I learned more about craft retreats, especially the security aspect, vetting instructors, and how to deal with caterers. It's amazing how details like this can add so much texture to a book. However, if I'm waxing so poetic over the craft retreat angle that you're beginning to think that there's not enough mystery, think again. There's plenty of that. In fact, Bryan's combination of mystery, setting, and character make Death Among the Doilies one of the strongest cozy debuts I've read this year. I can't wait to see what happens next!