A Pattern of Lies by Charles Todd 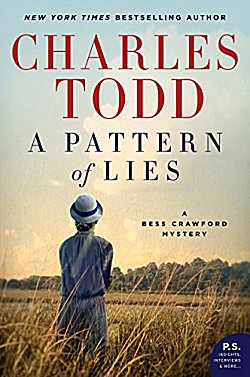 First Line: I didn't know much about the little town of Cranbourne on The Swale in northeastern Kent, only that its abbey had been destroyed by a very angry Henry VIII when the abbot of the day refused to take the King's side in certain matters.

While in Kent visiting a soldier she'd nursed in France, Bess Crawford learns about the suspicion and rumors surrounding the explosion at the Ashton Gunpowder Mill, which killed over one hundred local men. Philip Ashton is arrested and jailed, but Bess doesn't see any lessening of hostilities toward the family. In fact, it's getting worse. Someone has a personal stake in ruining the entire Ashton family, and Bess is determined to get to the bottom of the mystery-- even  when it involves tracking down the only known witness to the explosion. The witness is now at the front in France, and in trying to get him back to England alive to testify, Bess is going to have to put her own life on the line.

Bess Crawford is a very good nurse who always seems to have the devil's own luck in getting assigned to transport wounded men back to England so she can then go haring around the countryside to solve mysteries. Since A Pattern of Lies is one of the best books in this series, I don't mind a bit.

There is a great deal of suspense and lots of suspects in this mystery, but if you follow the tiny, carefully planted clues the writing team known as Charles Todd gives us, you will come to the solution before you're formally told. That didn't bother me much either. Why? Because the authors do a splendid job of showing us how easily people are deceived by lies, and to what lengths they'll go when they're determined to believe those lies. Not that that would have any connotations to the present day.... This entire scenario that Bess innocently wanders into fascinated me, and I was as equally interested in finding out what would be done to the Ashtons next as I was in identifying the person responsible for it all.

If you're in the mood for something similar to Jacqueline Winspear's Maisie Dobbs mysteries, something with a solid historical background and a strong central character, I suggest that you become acquainted with Bess Crawford. I've enjoyed my journey with Bess, and I think you will, too. In this book, World War I is almost at an end, and I'm very interested in seeing what Sister Crawford does next.