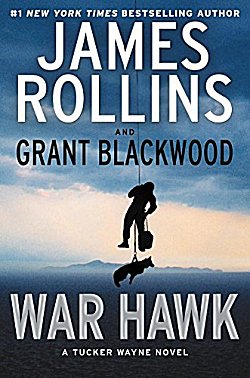 First Line: Few in the Abwehr's military intelligence knew his true name or even his intent here on British soil.

When a former army colleague asks Tucker Wayne for help, he cannot refuse, even if it means dredging up things from his past that he'd rather leave buried. His friend and her son are on the run from assassins, and the only way Wayne can keep them safe is to discover who killed a brilliant computer programmer... and why.

The crime leads back to powerful figures in the U.S. government and will have Wayne and his war dog Kane on the move from the Deep South to Trinidad and places further afield. The two are trying to track a mystery that dates back to World War II, and to do this they will have to put everything they've got on the line.

The remarkable bond between Tucker Wayne and Kane completely won me over in The Kill Switch, and I couldn't possibly miss the second installment of their adventures.The action wasn't as predictable as it was in the first, which made the book even more enjoyable.

The focus in this book is information warfare, and it is terrifying. Those who control information are those who will be in control of the world. As always, Rollins includes  an "Author's Note to Readers: Truth or Fiction" at the back of the book, and it's a good idea to read it. He doesn't make up most of what he writes about. Part of the mystery of War Hawk revolves around some work Alan Turing did at Bletchley Park during World War II. Were his papers really lost in a fire, or were they stolen? They just may contain the key to winning this information war.

Tucker's PTSD and the way he relates to others figures highly in this book, and these things are a key to his character. So is his relationship with the war dog, Kane. When Rollins first wrote about Kane, he asked people in the military who actually worked with war dogs if what he'd written was realistic. All of them told him that the dogs were actually capable of doing much more than he'd written. Keep that in mind when you read about Kane. His relationship with Tucker will fill you with a bit of awe, a lot of admiration... and you might even get a bit emotional, too.

James Rollins and Grant Blackwood have written the kind of thriller I enjoy the most: an intriguing plot, plenty of fast-paced action, and complex characters. Just the combination that will keep me coming back for more.