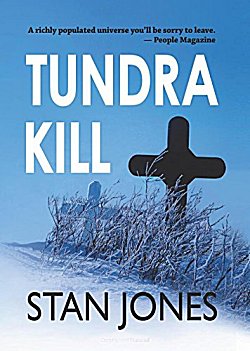 After some restructuring, Nathan Active finds himself the newly appointed chief of public safety for the newly created Chukchi Regional Borough-- an area larger than 15 of the United States. He hasn't even had time to move into his office when he's got a suspicious death on his hands. However, that has to go on the back burner when Alaska's second female governor comes to town. She wants Nathan as her body guard, and what she wants is what she gets. (No matter how much Nathan complains.)

It really comes as no surprise to him when Nathan learns that the governor is the most dangerous woman he's ever met. When he doesn't do what the governor wants, he not only finds his career on the line, he finds the lives of his beloved Grace and her daughter Nita to be threatened as well. In the past Nathan has been a bit gullible when it comes to women. Does he have what it takes to outwit the wily governor?

After a very long seven-year gap, I was thrilled to see another installment of one of my favorite series. Stan Jones makes the remote regions of Alaska and the customs, food, language, and familial relationships of the Inupiat people come to life. He's the only author I've read who can actually make the Arctic ice speak. In Tundra Kill, Jones brings readers right into the heart of the wilderness in an iced-up Cesna-- an excellent section of the book.

Relationships play an important role here, and the relationship between Nathan and Grace is first and foremost. Tundra Kill is a bit more sexually explicit than I'm used to when reading mysteries, but it's in keeping with the story (and never goes overboard). Grace is a survivor of sexual abuse, and the intimate relationship Nathan has with the woman he loves is fundamental to their future together.

Jones has written a wonderfully twisty plot with touches of humor that can make readers laugh out loud. Nathan is up against some very devious people, and it is fun to watch how he deals with them. Long-time fans of the series-- like me-- are familiar with his naivete and will probably react strongly to some of the twists and turns in the plot. I know I did.

To be honest, I could've done without the Sarah Palin-esque character in Tundra Kill, but Jones kept me from terminal eyes-rolling-back-in-the-head with his fast pace, devilish plot, and Nathan Active. I sincerely hope there isn't another seven years until the next book. This entire series is choice.