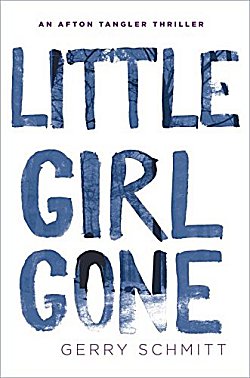 First Line: Marjorie Sorenson turned hard, flat, snake eyes on the young woman in the fox fur parka who strolled toward her in the Skylark Shopping Mall.

It is every parent's nightmare: you hire a babysitter to care for your baby so that you can attend a business dinner. When you return home, you find the babysitter assaulted and tied up... and your baby is gone.

As a family liaison officer for the Minneapolis Police Department, Afton Tangler's job is to deal with the aftermath of crimes such as this, but she'd much rather be a detective, and this kidnapping gives her the chance she's been looking for.

Working with Max Montgomery, Afton begins to wonder if they'll ever find the baby alive. The case is seemingly a bottomless pit of unrelated clues. But what bothers her most is the feeling she has that the kidnapper has done this before... and that more babies are going to disappear if she doesn't work faster.

This first Afton Tangler thriller is a hard-edged, engrossing read written by a woman better known for her cozy mysteries-- Laura Childs. Writing under her real name, she has created a good, strong cast. Single mother Afton Tangler is smart, intuitive, full of common sense, and known for driving two expensive cars that she got in her divorce settlement.  She's partnered with veteran detective Max Montgomery, a man who sees how much potential this family liaison officer has. I was really impressed with their boss, Deputy Chief Gerald Thacker. Afton is a rookie; she makes mistakes and steps on the toes of some of her superiors. But whatever she does, she does it for the right reason. Thacker sees this and sticks up for her, and when Afton thanks him, his response is that he doesn't need to be thanked for doing the right thing. Now... how many superior officers can you remember doing that in the mysteries you've read? Not many, right?

No stranger to Minnesota winters, Schmitt pulled me right into the middle of a bone-chilling one, and she also taught me a thing or two about reborn dolls-- dolls that are made up to look as much like a newborn baby as possible. The author has crafted a good investigation. Not only did I learn some things, I appreciated how Schmitt showed that it is often the grunt work and just a tiny bit of intuition that can break a case right open.

Little Girl Gone is called a thriller for a reason. The bad guys are particularly creepy, the book's pace is fast, and it's a very scary scene when Afton confronts the kidnappers. It's good to see a writer try something different. I, for one, am looking forward to Afton's next case.