Another One Goes Tonight by Peter Lovesey 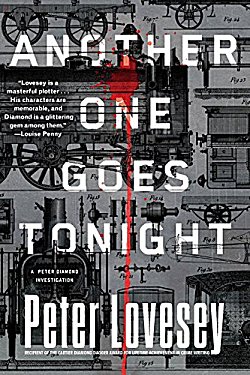 First Line: "I've seen a few things on the night shift," Police Sergeant Lew Morgan said, "but this beats them all."

Isn't it always the way? You're at the end of your shift, you're about to head home, and then there's that one last call. That's exactly what happens to two police officers. En route to investigate the call, the patrol car spins out of control, killing one of the officers and leaving the other in critical condition.

Professional Standards sends Peter Diamond to investigate, and his supervisor is desperately hoping that Diamond will find that the officers were not at fault. There's no joy for his supervisor because Diamond finds something even worse: a civilian was involved in the crash and has been lying, unseen, on the side of the road for hours. Diamond administers CPR, and the man is rushed to the hospital, barely clinging to life. But when Diamond continues to work the crash, things just don't add up, and he begins to look into the background of the civilian. The detective uncovers a string of uninvestigated deaths. Did he save the life of a serial killer?

If you love to read a mystery that has a wonderfully convoluted plot with lots of misdirection, get your hands on Peter Lovesey's Another One Goes Tonight-- it is a delight.

Not only is there that marvelous plot, there is plenty of humor, as when Diamond delights in butchering the names of the two Professional Standards investigators every time he has to say them. Or watching the confusion on people's faces when they wonder who Hornby is. Watching Diamond at work is a pleasure. Seldom is he at a loss for doing or saying just the right thing to persuade a reluctant person to cough up the information he needs. This man is a consummate pro.

An added plus to the book is observing the quandary Diamond finds himself in when he begins to think he saved the life of a serial killer. He finds himself on quite an emotional roller coaster.