The Girl in the Spider's Web by David Lagercrantz 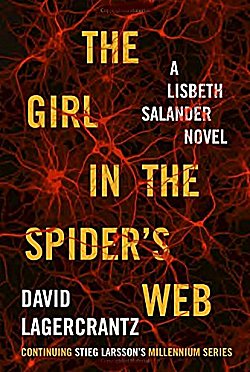 First Line: This story begins with a dream, and not a particularly spectacular one at that.

In many businesses the world over, the mantra is "What have you done for me lately?" It's true in journalism, and Mikael Blomkvist's detractors take every opportunity they can to tell the world that Blomkvist is over the hill, that he doesn't have what it takes anymore. That's all about to change.

Blomkvist receives a tip from one of his sources who claims to have vital information given to him by a young female hacker. It's too intriguing for Blomkvist to ignore, and he turns to the one person he knows can help him find the truth: Lisbeth Salander. In no time at all, the two of them are drawn into a world of spies and cybercriminals, many of whom are more than willing to kill to keep their secrets.

When I learned that David Lagercrantz would be continuing Stieg Larsson's Millennium series, I was intrigued... but cautious. The first thing I did was get my hands on a copy of Lagercrantz's book Fall of Man in Wilmslow, a mystery featuring Alan Turing. I was disappointed, but I love the characters of Salander and Blomkvist so much that I couldn't stay away from this newest book. For the most part I wish I had.

Like Fall of Man in Wilmslow, there are large sections of the book in which not much happens. In fact, it took until right around page 200 for the pace to finally pick up.

The worst part for me was the lack of Stieg Larsson's splendid characters, Blomkvist and Salander; in fact they almost seem like pale imitations of themselves. Yes, this book is competently written, but it lacks Larsson's passion, his fire for his story and his characters. I just heard that there's going to be yet another book in the series written by Lagercrantz. I have learned my lesson. This time I'm going to leave it alone.