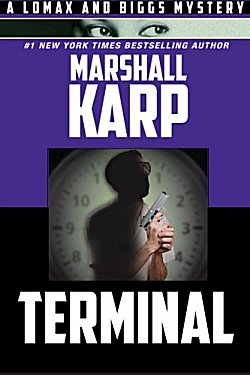 Detective Mike Lomax and his girlfriend are enjoying their sojourn as surrogate parents. Precocious eight-year-old Sophie is a joy, and it's going to be tough for Mike to give the little girl back to her mother, who's gone to China to be with her own, dying, mother.

What he's not enjoying is waiting for his doctor to come in and give him a prostate exam, but he's "saved" by the sound of a shotgun blast. Grabbing his gun and running down the hall with his bare behind in full view due to his open-backed exam gown, Mike is just in time to witness the owner of the shotgun commit suicide while standing over the body of the doctor he's killed.

When Lomax and his partner Terry Biggs begin investigating, evidence leads them to the fact that someone is recruiting terminally ill people to commit murder before they die-- with a lot of cash going to the loved ones they leave behind. Now all the two detectives have to do is find out who's behind it all-- and why.

It's been a long six years since the last Lomax and Biggs mystery, and I have to admit to doing a little happy dance when I discovered the existence of Terminal.  Although it's understandable that Marshall Karp would want to partner with James Patterson in the highly successful NYPD Red series, he's created two police detectives that I just can't get enough of.

Karp always seems to come up with an ingenious mystery. In Terminal, we know the identity of the killers and why they've signed up as hit men, but we still need to know who's behind it all and why this person wants it done. Karp skillfully joins the personal to the professional in such a way that readers feel invested in the story; they're not just armchair sleuths trying to solve the crime before the heroes do. Mike Lomax not only has Sophie in his life at this time, the terminally ill killers remind him painfully of his wife who lost her own battle with cancer. He's also worried about the extra blood work his doctor has insisted upon. All this makes him a bit crankier than longtime fans have ever seen him. Did it bother me? Not in the slightest. These things would make most humans a bit irritable.

Karp sprinkles his character fairy dust not only on Lomax and Biggs, but on those terminally ill killers as well. I felt real empathy for them-- and I also wondered what I would do if faced with identical circumstances.

When you read one of Marshall Karp's Lomax and Biggs mysteries, you're going to get a puzzler of a crime, a fast pace, laugh-out-loud humor, and some wonderfully drawn characters that stick in your mind long after you've finished reading the books. Terminal is an excellent addition to the series, but I do have one request of the author:

Please don't make me wait another six years before your next Lomax and Biggs book!