Cracked to Death by Cheryl Hollon 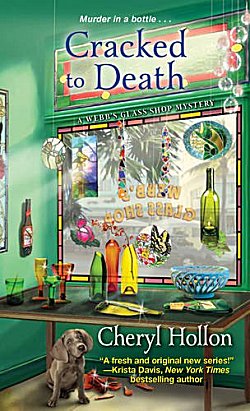 First Line: "Come on. Do the right thing-- again."

Savannah Webb has the perfect idea to help St. Petersburg, Florida residents beat the summer heat and boost sales in Webb's Glass Shop: a workshop that uses recyclable bottles. The class is taught by store manager Amanda Blake, and it's a bigger hit than anyone had anticipated due in part to a pair of very old bottles brought in by Martin Lane.

The bottles may be relics of a storied local pirate shipwreck, and it looks as though someone is taking their existence very seriously. Too seriously. Martin's body washes ashore the next morning with another of the bottles tucked in his dive bag. When cell phone records tie Amanda to Martin's death, Savannah has to find the real killer and keep her friend from going to prison.

With glass-making, antique glass, and pirate treasure, Cracked to Death looked to be right up my alley. There was enough information about glass-- and upcycling-- to keep my interest, and Savannah's recently expanded shop meant that I kept an eye peeled on her business acumen. It was also refreshing to see that Savannah has a good rapport with local police. One thing that's been done to death in cozy mysteries is the dumb, obstructive police officer in charge of an investigation.

The author has also created some interesting characters, and I don't just mean Savannah Webb. There's the British heartthrob Edward Morris, Rooney the Weimaraner, and-- most importantly to me-- Jacob Underwood, a young man with Asperger's who's become a stained glass restoration expert.

However, I chose the wrong series to start off with book number three. In her role as Suspect #1, store manager Amanda Blake's behavior just turned me completely off. To the tune that I didn't care if her innocence was proven or not. Pretty harsh, I know. But if I'd gotten to know Amanda pre- lies, evasions, suspicious actions, and emotional crackups, I undoubtedly would have had some badly needed empathy for her.

If you're not new to the series, then you should be very happy-- especially since you already know Amanda. If you're new to the series, like I was, I would suggest that you may want to start with the first book in the series so you can avoid any possible adverse reactions to Savannah's store manager. There is a lot to like about Cracked to Death.