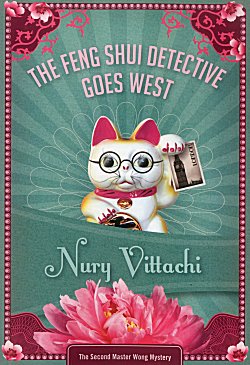 First Line: In the days of the Yellow Emperor, there was a Minister of Laws who believed there was nothing perfect in this world, until the day he had a daughter.

Creditors are breathing down feng shui master C.F. Wong's neck. He needs money fast, so when he's given a job that entails travel to England to bring the art of feng shui to Buckingham Palace, he can't refuse. No matter how much he doesn't like Westerners. To say that the job isn't exactly as advertised would be a prime example of understatement.

Several years ago I read the first Feng Shui Detective mystery, and I was enchanted by the humor. I found Wong and his assistant hilarious, and when I saw that there were more books to come, I kept reminding myself that I had to get back to this series.

Evidently a lot of water went under the bridge during the intervening years because my reaction to this second book is much different than my reaction to the first. Yes, there is still plenty of good humor, especially when Wong is butchering the English language. However, I no longer find his work-resistant assistant as funny as I had originally, and the plot just kept losing my interest.

Now I'm left wondering what happened to change my opinion of this series so drastically from one book to the next!