Recipes for Love and Murder by Sally Andrew 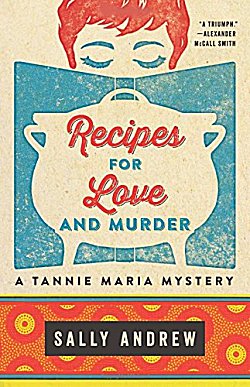 First Line: Isn't life funny? You know, how one thing leads to another in a way you just don't expect.

Tannie Maria loves to cook, and she loves to eat. She also loves sharing her experiences with food in her recipe column for the local newspaper in her rural South African town. But that all changes when the newspaper owners decide that their readership is hungrier for advice on love than it is for meal tips. Tannie Maria doesn't like the change, but she soon discovers that she has a knack for helping people with their problems... and adding a recipe or two to make them feel better.

One of the people Tannie Maria reaches out to is a woman with an abusive husband. When that woman is found murdered, Tannie Maria becomes dangerously tangled up in the investigation-- even though one police detective in particular is doing everything he can to keep her safe.

I have a feeling that there are people who are going to read Recipes for Love and Murder and think it's nothing but an imitation of Alexander McCall Smith's Precious Ramotswe series set in Botswana. Now having read books from both series, I can safely say that-- in my opinion-- it's similar, but not an imitation, and that I prefer Sally Andrews' book. I could only read three or four books into Smith's series because Mma Ramotswe was too all-knowing and the books were just a bit too sweet and charming for my taste.

Sally Andrews' book not only has recipes and an Afrikaans/South African glossary, it gave me a very real feel for rural South Africa, its landscape, its weather, and its wildlife. Tannie Maria is a woman who notices all these things, and when she's not outside, she's cooking, or at the newspaper office working on her column and being a good friend to her co-workers Hattie and Jessie.

Tannie Maria is a wonderful character with some rough edges and a bit of history that she has to deal with through the course of the book. There are some tension-filled, downright scary scenes, and I found it tough to identify the killer. In short-- I loved this book and am most definitely looking forward to reading more in the series, but this is where I have to file a complaint-- and a word of advice.

The advice first. I do recommend that you read this book, but when you do, please make sure that you read a physical copy of the book, not a digital copy. Andrews uses many Afrikaans and South African words throughout the book, and although I could usually determine a word's meaning from its context, I'm one of these people who enjoy learning bits and pieces of other languages, so there were times that I wanted to make sure that I had deduced the correct meaning. It was absolutely painful to flip back and forth from story to glossary  on my Kindle. It would've been ideal if each of those words had been a hyperlink that would take me directly to its definition in the glossary, but I imagine that the price of the book would have doubled (at least). It's a shame, but I have learned my lesson. Rant over. (And for the curious, my tribulations with the glossary had no effect on my rating of the book. This isn't Sally Andrew's fault.)

Recipes for Love and Murder is a wonderful mystery that takes you right to the heart of rural South Africa and its people. I highly recommend it!