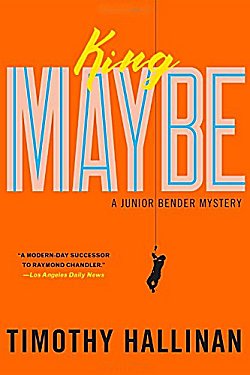 First Line: Bad luck, as my mentor and surrogate father, Herbie Mott, used to say, arrives on the wind.

If bad luck does arrive on the wind, then Junior Bender must be in a hurricane. A Los Angeles-based cat burglar and reluctant private investigator for local crooks, Bender needs assistance in getting out alive when he steals one of the world's rarest stamps from a professional killer. But that's only the beginning. His escape sets off a deadly criminal chain reaction-- and requires him to commit three burglaries in one week.

The third burglary involves getting into the fortress of King Maybe-- a ruthless studio mogul hated by one and all. Junior may wish that he'd just stopped with the first burglary and taken his chances with the killer, but King Maybe? This guy deserves every bit of what's coming to him-- as long as Junior can pull it off.

I've loved Hallinan's Junior Bender mysteries since the very first one, Crashed. Blame it on Hollywood and television series like It Takes a Thief or movies like The Pink Panther. Of course readers get Hallinan's trademark humor, strongly constructed plots, and wonderful characterizations, but they also receive tasty appetizers of Los Angeles film and criminal history. With Hallinan's skill, it's a recipe I simply cannot resist.

With Junior's luck all being bad in King Maybe, the focus naturally has to be on him as an escape artist, and his sense of self-preservation and lightning-fast ability to think on his feet are a joy to behold. The three-fold plot involving (1) King Maybe, (2) fallout from the stamp heist, and (3) the trouble Junior's daughter is having moves quickly, and-- as usual for a Hallinan novel-- the focus really isn't on Junior's skills as a burglar or as an investigator. The focus is on his relationships with the other characters, and Hallinan is one of the best when it comes to delineating those emotional bonds.

There's a new(ish) woman in his life with whom Junior is having trouble. His relationship with his ex-wife seems to be on a more even keel, and things are great between Junior and his daughter. But the two characters who have rapidly become my favorites are the two teenage hackers Anime and Lilli. In them I see shades of Miaow, the young Thai girl in Hallinan's Poke Rafferty series. Anime and Lilli are worlds beyond smart, extremely unconventional, and often downright hilarious.

If you have a fondness for cat burglars with hearts of gold (like I do) and mysteries with wonderful stories and characters, I urge you to become acquainted with Junior Bender. You could probably jump in anywhere and not be too confused, but I'd suggest you start at the beginning with Crashed so you won't miss any of the character development. And if you haven't already, get your hands on the first Poke Rafferty mystery, A Nail Through the Heart. You really should become acquainted with Poke and Rose and Miaow and.... (In other words, Tim Hallinan writes marvelous books!)