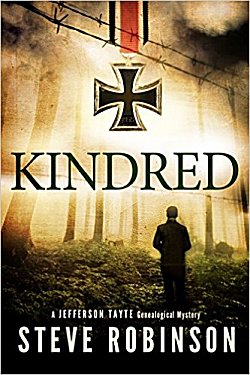 First Line: He wished now that he had taken the road.

For years, genealogist Jefferson Tayte has used his skills to reunite families and to uncover their pasts. There's been only one person he's been unable to help: himself. But now he's following leads given to him by his late mentor, and they've led him and Professor Jean Summer to Munich, Germany.

Once in Munich, they've barely begun to scratch the surface when their search leads them directly into some dangerous secrets of World War II-- secrets that someone is more than willing to kill for.

Steve Robinson's genealogical sleuth Jefferson Tayte has uncovered many family secrets and solved many crimes throughout this series, and it was a pleasure to see that he was finally getting the chance to discover the identity of his own parents.

With a few chapters written from the perspective of 1940s wartime Germany, Tayte is quickly drawn into Nazi secrets and fascist organizations. If he finds the truth, it may not be what he wants to hear, but as Robinson (and hopefully everyone else) well knows, our ancestors are a mixed bag of good people and bad. No exceptions.

I've watched the author's storytelling skill grow with each book, and those skills were good to begin with. He's certainly become very adept at crafting well-paced, exciting action sequences. He's also created two strong and appealing characters in Tayte and Summer, and I enjoy watching them work together.

However, I felt that the bad guy hired the wrong group of henchmen because they seemed a bit inept in their attempts to silence our two heroes. If they'd had  more skill, it would've ratcheted up the tension even more. I also recognized the main plot twist well in advance, but this did not ruin the book for me. Kindred is still an exciting read with a lead character that I've grown to care about during the course of the series.

If you like excitement, history, good characters, and a fast-paced mystery, I hope you'll join me in reading Steve Robinson's Jefferson Tayte mysteries. Good stuff!