The Considerate Killer by Lene Kaaberbøl and Agnete Friis 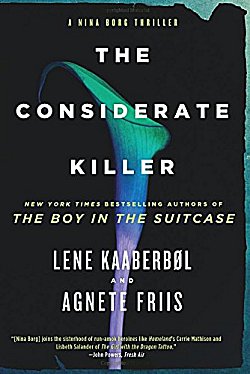 First Line: The confessional was empty.

In a last-ditch attempt to save their marriage, Nina Borg and her husband left Denmark for a dream vacation in the Philippines. Six months have passed, and only now are repercussions from that holiday surfacing.

Nina is attacked in a grocery store parking lot. The last thing she remembers is her attacker asking for forgiveness. It's only after Nina can begin to think clearly and piece things together that she realizes the attempt on her life has to be linked to that Philippine vacation and the three young men she met there by chance.

I've enjoyed this series from its inception. Nina Borg is a Red Cross nurse with serious flaws-- the origin of which become crystal clear in The Considerate Killer. Anyone in need always comes before her husband and children, and her husband is understandably sick of it. In this fourth book, however, Nina is the one who needs help. She has suffered serious injuries that may affect her for the rest of her life.

There are various points of view throughout the book which help to clarify the story. We hear from Nina, from Søren who comes to her aid, and from three young men that Nina met while in the Philippines. In part The Considerate Killer is the character study of a weak young man and the depths to which his weakness takes him. Although I did enjoy the sections taking place in the Philippines, I did miss the focus being on Nina because she is such a strong, vivid character.

Since the "who" part of the mystery is answered very early on, it's the "why" that becomes the primary question. That... and the question readers have asked themselves many times: Has Nina finally learned to stop trying to save the world?

Nina is the heart and soul of this series. Seldom do readers get to know a character who so wholeheartedly-- and blindly-- throws herself into the role of White Knight, constantly battling to do right, unceasing in her fight to give a voice to the powerless. Yes, the stories are excellent, but Nina is the reason I recommend this series-- and to fully understand her, I suggest you begin at the beginning with The Boy in the Suitcase.